American Women for International Understanding is delighted to announce that six-time Emmy Award-winning news anchor, Lynette Romero, will emcee the 15th Annual International Women of Courage Celebration. A veteran journalist with more than three decades in the industry, Romero brings extensive news experience as anchor of the extremely popular KTLA Weekend Morning News. The 6am-11am morning news block leads the market with the highest average ratings across all other time periods.

Romero came to KTLA in January 1998 as a general assignment reporter and in her first year at the station, received the prestigious Golden Mike Award from the Radio and Television News Association of Southern California for producing and reporting the KTLA News series “Public Schools: Working the System.” From August 2000 to October 2004, Romero was co-anchor for “KTLA Prime News,” where she, along with her news colleagues, received a second Golden Mike for best 60-minute evening newscast. She is a recipient of six local Emmy Awards including an Emmy for best feature news reporting. In 2006, Romero received a local Emmy and Golden Mike Award for her work as anchor/reporter for the show “Access L.A. – The Latino Experience” and a local Emmy as reporter/producer for the five-part series “From Farm to Fork.” In 2015, Romero was honored by the National Hispanic Media Coalition with the Excellence in Broadcast Journalism Award.

Romero has travelled domestically and internationally in her role as a journalist covering stories in Prague, El Salvador, Mexico City, Guadalajara, and Rome where she covered the Papal Conclave for KTLA and other Tribune television stations across the country.

Prior to joining KTLA, Romero anchored and reported for 10 years at KUSA-TV in Denver. She also spent nearly a year reporting for KUSA-TV’s sister station in Austin, Texas, KVUE-TV. While in Denver, Romero’s assignments included the 1993 papal visit, the standoff in Waco and the bombing of the Federal Building in Oklahoma City.

Romero has been a member of the National Association of Hispanic Journalists and an advisory board member for the University of Colorado School of Journalism and Mass Communication. She has taught anchor and reporting classes for UCLA Extension. She spends much of her personal time in the community speaking at schools and community events.

Romero has a Bachelor of Science degree in journalism, broadcast news from the University of Colorado in Boulder, Colo. She was born and raised in Denver.

Romero’s mother, Viola, was diagnosed with severe dementia in 2012 and Romero moved her mother to California where Romero became her primary caregiver. Viola lived with Romero, her husband David and their daughter Olivia for nearly 10 years. Viola passed away January 24, 2022, and that’s when Romero began honoring her mother’s life and legacy by giving back to Alzheimer’s and Dementia awareness and research.

Romero lives in Los Angeles with her husband, daughter and their two rescue dogs Benny and LuLu.

Ambassador Verveer served as the first U.S. Ambassador for Global Women’s Issues, a position to which she was nominated by President Obama in 2009. In that role, she coordinated foreign policy issues and activities relating to the political, economic and social advancement of women, traveling to nearly 60 countries. She worked to ensure that women’s participation and rights are fully integrated into U.S. foreign policy, and she played a leadership role in the Administration’s development of the U.S. National Action Plan on Women, Peace and Security. President Obama also appointed her to serve as the U.S. Representative to the UN Commission on the Status of Women.

From 2000-2008, she was the Chair and Co-CEO of Vital Voices Global Partnership, an international NGO that she co-founded to invest in emerging women leaders. During the Clinton administration, she served as Assistant to the President and Chief of Staff to the First Lady. She also led the effort to establish the President’s Interagency Council on Women, and was instrumental in the adoption of the Trafficking Victims Protection Act of 2000. She is the co-author of Fast Forward: How Women Can Achieve Power and Purpose (2015).

Ambassador Verveer has a B.S. and M.S. from Georgetown University and holds several honorary degrees. In 2013, she was the Humanitas Visiting Professor at the University of Cambridge and in 2017, she was selected to deliver the Tanner Lecture at Clare Hall College, Cambridge. She is a member of the Council on Foreign Relations and the Trilateral Commission, and she serves on the Boards of the National Endowment for Democracy, the Atlantic Council, as well as the World Bank Advisory Council on Gender and Development. She has also served as the Special Representative on Gender Issues for the OSCE Chairperson-in-Office. She is the recipient of numerous awards, including the Secretary of State’s Award for Distinguished Service. In 2008, the President of Ukraine awarded her the Order of Princess Olga.

We look forward to working with Ambassador Verveer and the other accomplished women on our 2022 honorary committee.

For more information about the Georgetown Institute for Women, Peace and Security, please click here.

AWIU’s Chicago Chapter hosted a Sunday brunch at Reza’s Middle Eastern restaurant on December 12th in support of the Afghan Refugee Resettlement Program in Chicago. The goal was twofold: to increase membership and to help with the chapter’s nascent refugee project with the Heartland Alliance. Some 36 people, members and their invited guests, attended.

Judith Jakaitis explained the origin of the joint effort between AWIU and the Heartland Alliance Refugee & Immigrant Community Services (RICS) office to provide for incoming families from Afghanistan.

Afghan guests were Mr. Arash, from Bangladesh, and Ms. Aaila. Arash, who spoke about the United States Special Immigrant Visa (SIV) and his relocation, served as an interpreter for U. S. troops, and left his wife and children because he feared for his life. Aaila shared her experiences in Afghanistan and the immigration process. “I am fortunate that I spoke English when I left Afghanistan, and I’ve found employment in Chicago,” she told the group. Both refugees spoke about the conditions requiring them to leave their respective countries and the struggles and successes negotiating life in the United States. They expressed deep gratitude for the invaluable help and support provided by the Heartland Alliance RICS.

Heartland Alliance representative Alyssa Wilson, Youth Program Coordinator and Tara Guillaume, Community Engagement Coordinator, spoke on their efforts to help Afghan refugees resettle in Chicago. They described the process and services they provide to recent immigrants from all over the world. They then shared the dates and number of arriving Afghans expected at the agency in the very near future and what each family will need: rugs, furniture, groceries including powdered milk along with Chicago transit passes. They directed attendees to the QR code on the Heartland Alliance RICS website to see the wish list. Alyssa asked for volunteers to help with those needs.

“AWIU Chicago has supported the influx of Afghans through a previous clothing drive, and we’ll continue to assist in setting up households for refugee families,” said Chapter chair Janice Colom. 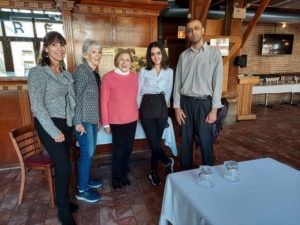 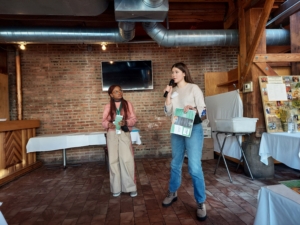 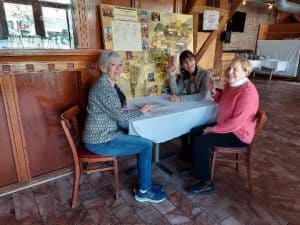