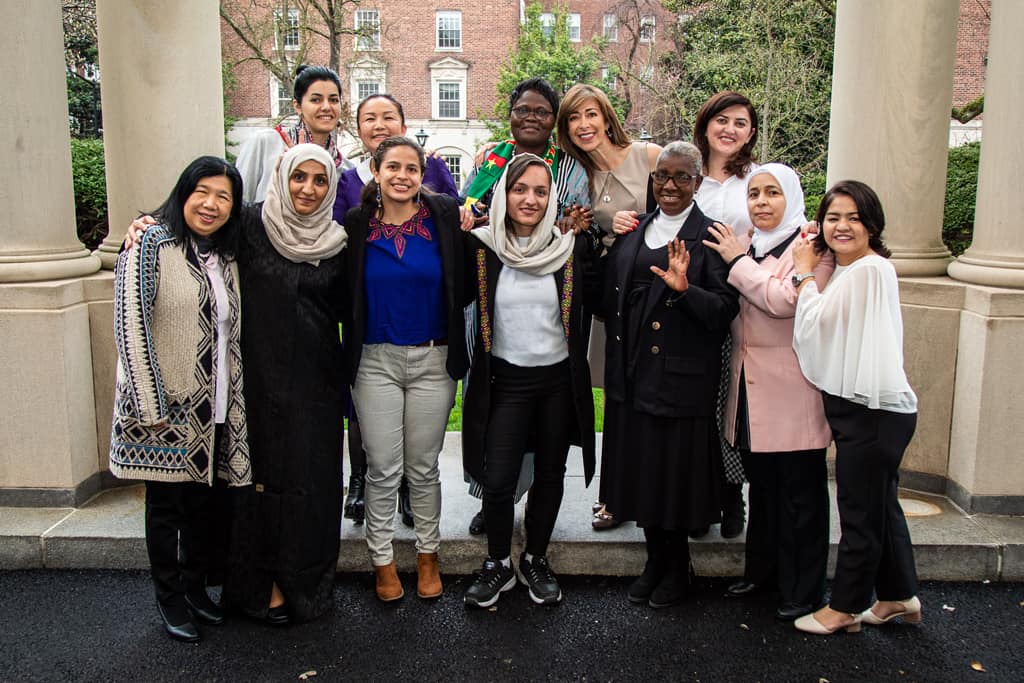 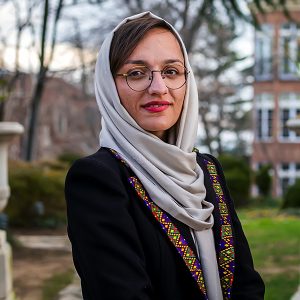 After successfully launching and operating a women-focused radio station, Afghanistan’s Zarifa Ghafari became mayor of Maidan Shar, in conservative Wardak province, at the age of 26. When she showed up to start work, a male mob appeared and she was forced to flee. Despite death threats, Ms. Ghafari came back, defying her conservative critics and their narrative that a woman is unfit to lead. She then withstood a walkout by all of the male members of her office. She later demonstrated ability and courage in tackling her town’s problems. Despite fierce opposition from vested interests, she successfully launched a “Clean City, Green City” campaign that reduced littering. Ghafari’s courage has inspired girls and women not only in her community and the wider province, but across the country. In her capacity as a trail-blazer and door-opener for a new generation of young women, she has helped empower the women of Afghanistan. 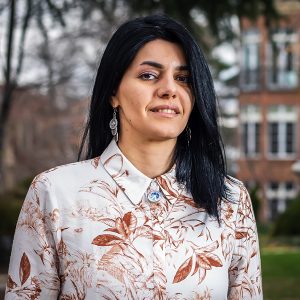 Using her platform as a journalist, Kocharyan has championed children with mental health issues and has emerged as a leading voice in the fight against psychological, physical, and domestic violence against women and children. Through her dedication and resolve, Kocharyan became famous for launching “Voices of Violence” in August 2018. She has become a spokesperson on gender-based violence in Armenia and has continued to speak out despite harsh criticism – from people on the street who yell “shame” as she passes by, to parliamentarians speaking out against her and threatening her with lawsuits. She successfully started a conversation about domestic and sexual violence that is slowly leading to some action. Gender-based violence is a pervasive problem throughout Armenia, where traditional social norms regarding masculinity, femininity, gender equality, and the division of household tasks remain rigid, making her achievements and impact all the more impressive. 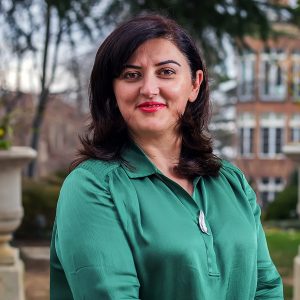 Shahla Humbatova has worked as a defense lawyer in Azerbaijan since 2013, and is one of a handful of legal advocates who have been consistently willing to defend individuals facing punishment for exercising their fundamental freedoms. She has bravely defended human rights defenders, journalists, bloggers, youth activists, members of the political opposition, and others. Her example has inspired other lawyers to better advocate for their clients in politically sensitive cases, and her courage in representing LGBT clients in a conservative culture has pushed civil society further down the path to tolerance. She is one of only two female lawyers to take these cases on in a difficult environment in which human rights lawyers have regularly been harassed and threatened in social media, suspended from practicing law, and disbarred. 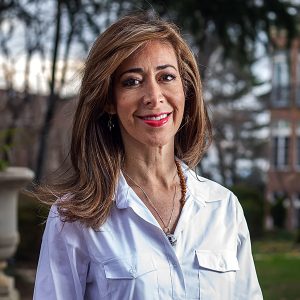 Ximena Galarza is a Bolivian journalist with over 25 years of experience. She has worked as a reporter, a television presenter, and news editor on some of Bolivia’s most important news channels including Red UNO, Cadena A, and TVU. Across her extensive career, Galarza has interviewed hundreds of politicians, academics, intellectuals, artists, and experts. She has also trained journalists to better inform the public of their rights and obligations. Galarza’s work has supported democracy in Bolivia and exposed corruption and violations of democratic freedoms. Since 2015, Galarza has hosted the program Jaque Mate (Check Mate) on TVU, one of Bolivia’s most prestigious news programs. In 2019, two of Galarza’s interviews impacted Bolivia’s history by demonstrating fraud in the October 20 presidential elections. The electoral irregularities were later confirmed by an independent analysis from the Organization of American States. 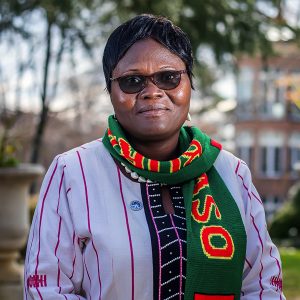 Claire Ouedraogo is the President of the Songmanegre Association for Women’s Development (Association féminine songmanegre pour le développement), an organization she founded that focuses on eliminating female genital mutilation/cutting (FGM/C) and promoting female empowerment through family planning education, vocational training, and micro-credit for women in the rural and underserved Center North region of Burkina Faso. She also serves as a senior advisor on the National Council to Combat Female Genital Mutilation. She is an active member of the Burkinabe Movement for Human and People’s Rights. In 2016, the prime minister of Burkina Faso nominated her as an Ambassador of Peace for her work in empowering rural women. Despite the increased threat of terrorist attacks and violent acts against civilians in Bam Province, Mrs. Ouedraogo continues her courageous work on behalf of vulnerable women threatened both by FGM/C and terrorism. 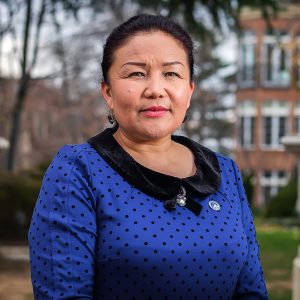 Sayragul Sauytbay was born in Ele Kazakh Autonomous Prefecture, Xinjiang, China. She attended medical university and worked as a doctor, teacher, education director, and headmaster. In July 2016, Sayragul and her family attempted to move to Kazakhstan but the Chinese Communist Party (CCP) confiscated her passport and prevented her from going with her husband and children. From November 2017 to March 2018, Sayragul was forced by the CCP to teach Chinese to ethnic minority people in a detention camp. In March 2018, Sauytbay fled to Kazakhstan to avoid being sent back to the camps, where she feared she would die. Subsequently, Sauytbay become one of the first victims in the world to speak publicly about the CCP’s repressive campaign against Muslims, igniting a movement against these abuses. Her testimony was among the first evidence that reached the broader international community of the CCP’s repressive policy, including both the camps and the coercive methods used against Muslim minorities. Sayragul and her family received asylum in Sweden, where they now live. 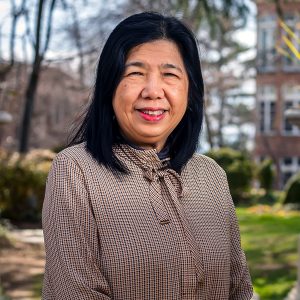 Following the February 2017 abduction of her husband, Christian pastor Raymond Koh, allegedly by state agents, Susanna Liew has fought on behalf of members of religious minorities who disappeared in Malaysia under similar circumstances—including Amri Che Mat, Joshua Hilmy, and Ruth Sitepu—or who face persecution for their beliefs. Susanna actively pursued justice for her husband and others during the Malaysian Human Rights Commission’s (SUHAKAM) 2018-2019 public inquiry into enforced disappearances and continues to push the government to investigate these cases and prosecute those responsible. Despite police harassment and death threats, she continues to advocate for her husband and others, not because of her faith or theirs, but because of their rights as Malaysians. Susanna and Raymond founded Hope Community in 2004, a non-profit organization that works with the poor, needy, and marginalized. She previously served as a school principal and educator. 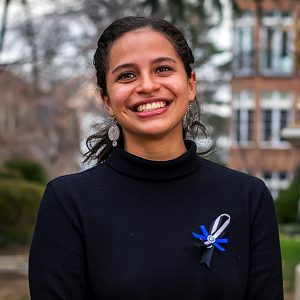 Coppens is one of the leaders of the 19th of April Student Movement in Nicaragua. She participated in numerous protests against the Sandinista government and the violent, repressive tactics deployed by its security forces. In September 2018, she was abducted by Nicaraguan police from her residence after participating in a peaceful protest. She was released in June and continued to speak out against the regime in Nicaragua. She had the opportunity to repatriate to Belgium during her first captivity, but refused. On November 14, Coppens was imprisoned again when she and 12 other activists attempted to bring water to mothers of political prisoners on hunger strike. She and other political prisoners were released by the regime on December 30, 2019. 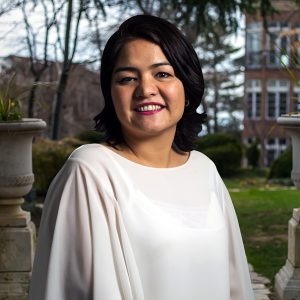 Known as the Iron Lady of Balochistan, Jalila Haider is a human rights attorney and founder of “We the Humans – Pakistan”, a non-profit organization to lift local communities by strengthening opportunities for vulnerable women and children. She specializes in defending women’s rights and provides free counseling and legal services to poverty-affected women. The first female attorney of her Hazara community, Haider led a peaceful hunger strike to recognize the right to life for the Hazara following a series of targeted attacks. Ms. Haider has taken up the cause of many other vulnerable communities. As Balochistan’s President of the Women Democratic Front and Balochistan’s branch of the Aurat (Woman’s) March, she fought against violence against women in public spaces, at work, and at home.

Khoulani is a survivor of the Assad regime’s detention and torture centers, which have arbitrarily detained over 140,000 Syrians, and has dedicated her life to helping the families of forcibly disappeared Syrians. A long-time civil society activist, she fled Syria in 2014 after her release from prison. She was imprisoned for six months for “peaceful activism” and her husband detained for two and a half years at the notorious Sadnaya Prison. They survived, but her three brothers died while in regime custody. From this devastating experience, Khoulani rededicated her life to seeking information and justice for the families of the disappeared. She is a founding member of “Families for Freedom”, a women-led movement launched in 2017 by families who’s loved ones have been detained and disappeared in Syria. Forced from her home and country, living under constant threat as a refugee without government representation, she continues to advocate for human rights, democracy, and peace in Syria. 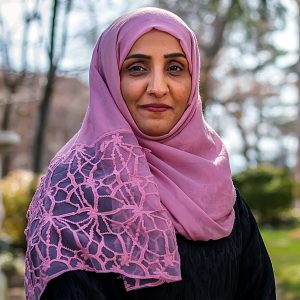 After obtaining her journalism degree, Yasmin Al-Qadhi was one of the first women to write articles for local newspapers during the Arab Spring pro-democracy protests in Sanaa’a.  When the civil war broke out in Yemen in 2015, Yasmine and her sister Entisar established the Marib Girls Foundation.  Through the foundation, she works with senior army officials to combat child recruitment and obtained the military’s commitment to release any child recruited or detained.  She fostered support for women displaced by the conflict by coordinating with the local and international community.  She also raised awareness by co-producing a film about the negative effects of displacement on women and children. Yasmine still resides in Yemen, a tribal society where women are discouraged from working in public spaces. She is working to change social norms and has become a role model in her society.  Both at home and abroad, she encourages women’s empowerment and meaningful participation in civil society and the UN-led peace process. 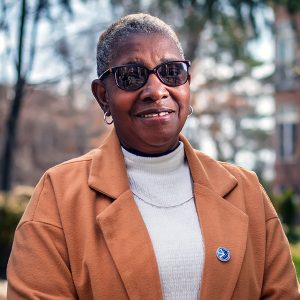 Dr. Rita Nyampinga has been a human rights defender for more than 35 years, fighting for gender equality in the workplace since she joined a trade union in 1983. She is also a trained mediator, and a mentor for girls and young women in leadership. Her experiences during detention led her to form the Female Prisoners Support Trust to support women and children in detention and raise awareness of the appalling conditions they face. Dr. Nyampinga continues to serve on several boards including Women Coalition of Zimbabwe, Crisis in Zimbabwe Coalition, Women Academy on Political Leadership Excellence, and Women AIDS Support Network. Her goal is to see a world that protects and respects the rights of prisoners through a just and fair legal system that is nondiscriminatory based on gender. In 2010 she became the Social and Economic Justice Ambassador for Zimbabwe’s Coalition on Debt and Development. Dr. Nyampinga won the Female Human Rights Activist of the Year in 2014 from Alpha Media House.