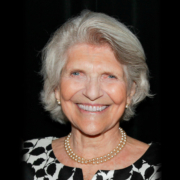 “I believe that global education is one of the most powerful tools to improve nations by reducing poverty, sustaining economic growth, and helping build a more peaceful world. Relations between countries are simply too important to be left in the hands of governments alone. Therefore, with our education programs we strive to nurture minds and expose people to different culture, thus increasing understanding, tolerance, and cooperation between people around the world.”
Harriet M. Fulbright

Mrs. Harriet Mayor Fulbright is president of the J. William & Harriet Fulbright Center, a non-profit organization which serves to advance the work of Mrs. Fulbright’s late husband, Senator J. William Fulbright, and to continue her own lifework.
She served as an unofficial ambassador for the 50th anniversary of the Fulbright Program and in that capacity traveled to numerous countries on all five major continents and throughout the United States to speak about the importance of international educational exchange and the pivotal role played by the Fulbright Program.

For the majority of her adult life, Mrs. Fulbright has worked in the areas of education and the arts. For three years, she served as the Executive Director of the President’s Committee on the Arts and the Humanities. She was the first Assistant Director of the Congressional Arts Caucus and was later appointed Executive Secretary of the International Congress of Art Historians at the National Gallery’s Center for the Advanced Study in the Arts. She has also served as the Executive Director of the Fulbright Association and as President of the Center for Arts in the Basic Curriculum, an organization which advocated education reform and conducted teacher training seminars.

In the United States, she has taught art at several institutions, including the Maret School and American University. She has also taught in Korea and Russia.

She has a Bachelor of Arts degree from Radcliffe College and a Master of Fine Arts from the George Washington University. She also holds honorary degrees from universities and colleges throughout the United States.

She has been awarded with many honors including the El Orden de Manuel Amador Guerrero from Panama, The Middle Cross of the Order of Merit from the Republic of Hungary, and the Order of Australia.

Lesley Stahl to be Honorary Chair of IWOC Celebration 2016