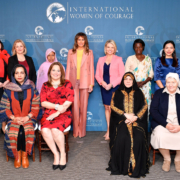 On March 29th, First Lady Melania Trump and Under Secretary of State for Political Affairs Thomas A. Shannon presented the 2017 Secretary of State’s International Women of Courage (IWOC) Award to a group of extraordinary women from around the world on March 29 at the State Department. “It was be my great honor to share a stage with these amazing women. Each of the award recipients has overcome incredible odds in her pursuit to change the world and make it better,” said First Lady Melania Trump. “As women, we must continue to stand together with the steadfast goal of making our world safer through acts of collaborative and individual bravery. As we all know, wherever women are diminished, the entire world is diminished with them.” Many of the women honored this year are advocates for victims of gender-based violence.

AWIU looks forward to welcoming the the 2017 International Women of Courage to our tenth annual Celebration in Los Angeles on April 6th at the Jonathan Club in downtown Los Angeles. The Honorary Chair is Mellody Hobson, President of Ariel Investments and an advocate for women, the arts and education. We are pleased to announce that all the International Women of Courage will be introduced by Betty Bernstein-Zabza, Senior Advisor and Director Office of Global Women’s Issues, United States Department of State. AWIU will also honor Anita DeFrantz, an Executive Board member of the International Olympic Committee and an advocate for gender equality and parity in global sports. Ms. DeFrantz is also being honored for her work to end slavery around the world.