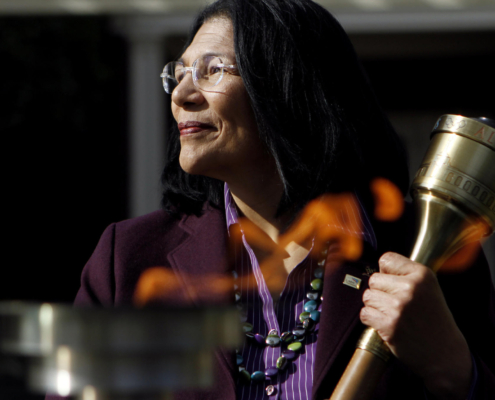 Ms. DeFrantz is a member of the International Olympic Committee and the IOC Executive Board. She serves on the Juridical Commission of the IOC, which is made up of lawyers, and on the Finance Commission, which reviews the investments and spending plans.

Before she joined the ranks of the IOC, DeFrantz captained the U.S. women’s rowing team and rowed in the eight that won a bronze medal at the 1976 Montreal Olympic Games. DeFrantz served as Vice President of the 1984 Los Angeles Olympic Organizing Committee and was elected to IOC membership in 1986, making her not only the first African-American but also the first American woman to serve on the committee.

In 1987, DeFrantz began her 28-year role stewarding the legacy of 1984 LA Games as president of the LA84 Foundation, which received 40% of the 1984 proceeds. Over the past 30 years, the LA84 Foundation has invested more than $225 million to support more than 2,000 youth sports organizations, and it continues to provide Los Angeles youth with recreation and sports opportunities.

In 1992, she was elected a member of the IOC Executive Board. In 1997, she became the organization’s first female vice president, a position she held until 2001. From 1989-1994 she served on the IOC’s Summer Program Commission, which determines which sports will be included in Olympic competition. In 1995, she became chair of the IOC’s Women and Sports Commission. She is credited with getting women’s softball and soccer added to the Olympic ticket.

Currently, she is president of the Tubman Truth Corp., an organization working to provide liberty and justice for all people trapped in slavery and human trafficking.  She also serves on LA 2024, the Los Angeles bid committee for the 2024 summer Olympic Games, as the LA 2024 Senior Adviser for Legacy.

DeFrantz received her B.A. from Connecticut College and a J.D. from the University of Pennsylvania Law School. She has received numerous honorary degrees and awards for her contributions to international sports, gender equity and creating a level playing field for athletes at home and globally.