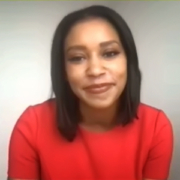 The 2021 IWOC Virtual Celebration continued after the prerecorded program with a live panel discussion moderated by ABC Congressional Correspondent Rachel Scott with 2021 IWOC Awardees Julienne Lusenge from the Democratic Republic of the Congo (DRC) and Canan Güllü from Turkey. Julienne Lusenge is the DRC’s leading activist fighting against gender-based violence and promoting rights for women and girls in conflict situations. Canan Güllü is a champion for gender-equity in Turkey, organizing for the rights of women and girls, and educating politicians and people about the effects of gender-based violence.

I don’t know how to explain the feeling that I felt at that time, the fear, because I thought it was the end of my life. But we didn’t stop, we continued. 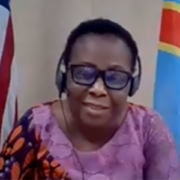 Rachel Scott opened the discussion by asking each woman to talk about a time when she was fearful had the courage to push on with her work. Julienne described how when she began documenting serious crimes against women, she was threatened, her house was pillaged, and she had to flee her home alone for several months. She stressed, “I don’t know how to explain the feeling that I felt at that time, the fear, because I thought it was really the end of my life. But we didn’t stop, we continued. I continued to document what was going on, and to present reports to the International Court of Justice.”

Canan replied in turn to the question by asking, “What is fear?” She explained that she’s not afraid to die because she’s survived two bad accidents. She knows she has many people behind her who will continue her cause, giving her courage. She states in every interview that they will never give up.

When asked about their greatest challenges, Julienne responded that it’s critical for the victims to be able to report about the crimes against them and to be willing to go to court. She stressed the need for sufficient resources so that the women can have access to legal counsel, citing that justice in the DRC is expensive. Sometimes a woman has a strong case with all the proof, but she doesn’t have sufficient resources to bring the case. In her mind, justice includes not only legal justice under the law and having the ability to speak out and not be silenced, but also social justice, including things such as access to medical care and clean water.

There are thousands of women that we have helped, and we have thousands of volunteers. We are strong, and we are working for women’s organizations.

Canan concurred that although the circumstances are different in Turkey, the paternal mentality is the same as in the DRC. Women were given rights under the law when Turkey was founded, though those rights have never been enforced. Canan has been doing her work for 30 years, but Turkey still has gender equity issues. She pointed to the fact that women can’t participate in decision-making, nor is there equal pay for equal work. Most distressing is the reality that their hard-fought gains are being taken away. For example, the Turkish government recently pulled out of the Istanbul Convention, which aimed to protect women against violence and to end the impunity of perpetrators. This withdrawal resulted in an increase in violence against women without recourse. The authorities say that since there is no Istanbul Convention, they can’t protect the victims anymore. Women’s organizations are reaching out for international support, arguing that this isn’t just a problem for women, it’s a human rights issue. Canan lamented that when you go to sleep at night, you can’t be happy because you know some woman will be subject to violence. “But at the same time,” she continued, “there are thousands of women that we have helped, and we have thousands of volunteers. We are strong, and we are working for women’s organizations.”

The risk of not speaking out is that things will just continue as they are now. It’s been decades that this violence has been happening in our country.

Julienne addressed the risk of staying silent and not speaking out. “The risk is that things will just continue as they are now. It’s been decades that this violence has been happening in our country, because of the conflicts that have been going on.” But this is not a cultural issue, she stressed, it’s about violence and the destruction of women and humiliation. “It’s about imposing power on others. If we want things to change, we have to find the courage to document, to make the voices of the women heard, and to go to court. If we do not document, the perpetrators will continue to do the crimes. We have won convictions at the national courts, and we will be bringing women’s testimony to the ICC [International Criminal Court].” Julienne also addressed the need to train law enforcement to understand women better. “Women may not be able to say I’ve been raped. They might say I was subjected to violence. So, police officers need to know they are talking about rape when they say that, and the police need to be able to document the crimes properly so the case will stand up in court.” She concluded with the idea that this isn’t just a women’s issue. “It’s not the problem of any individual, it is a problem for everybody. Women and men both understand the issue and they both want to help the victims.”

Do not ever be ashamed. You are the victim. When you are ashamed, you are victimized once again.

Rachel asked Canan what she would say to women in Turkey who are scared of speaking out. Canan tells the women, “Do not ever be ashamed. You are the victims. When you are ashamed, then you are victimized once again. Don’t be victimized again. All this was done to you. We should ask for justice from the courts, and we will go to court together. You are not alone. Your tears are very important to us.”

I always wear red when I’m doing this work because there are women who are raped for wearing red lipstick. I see the red on you, and I want to thank you.

Canan inserted one final point before the conversation ended. She wanted to thank Rachel. Canan said she always wears red when she is doing this work because there are women who are raped in Turkey for wearing red lipstick. She said to Rachel, “I see the red on you, and I want to thank you. This is our fight.” Rachel replied that she had read about Canan and what she said about wearing red. “So, I definitely wanted to make sure that I was wearing a red dress today,” Rachel said. “It was important to me, and just a note about how inspired I am by you.”

Courage Has Brought Them Here Today