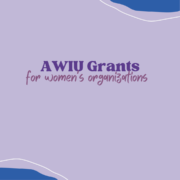 “A few years ago, because we have a limited budget and want our funds to go as far as possible, we began encouraging micro-grants for concrete projects, those with a beginning, middle, and end, and with specific goals clearly defined,” says Marsha Niazmand, co-chair of the Grants Committee. “We’ve found that this is the most efficient model for AWIU.”

The grant-awarding process is fairly clear-cut. The 2022 application period opened on January 5th, and the committee was immediately flooded with more applications than they’d ever received. By January 22nd , when the application period closed, AWIU had received almost 600 applications. Explaining this year’s surge, Stelle Feuers, co-chair with Marsha, says “We later learned an announcement of the AWIU grant application period had appeared on an international site,” which accounted for the abundance.

Meg Huebner, former chair of the committee, winnowed out the applications which didn’t meet the committee’s basic standards. Applications were then distributed among committee members to be screened for the following organizational and project criteria: women-oriented, concrete, time-limited, quantifiable outcome, with education, medical, or entrepreneurial goals, the highest number of female beneficiaries, preferably grassroots, and located in developing countries. The grants traditionally serve poorly educated, marginalized women and girls who would benefit from a project designed to meet their needs now and into the future. Added Stelle, “We are always looking for projects where the impact will translate beyond providing for the immediate need, where the benefits are sustainable beyond the project’s life with AWIU.”

In the past, AWIU has awarded grants to train midwives in fistula repair; for uterinecancer testing; to fund school supplies and Internet service; to provide bicycles to girls who live in remote areas to ride to school; to fund the purchase of goats so women can feed their families and sell the excess milk in small business ventures, and to produce briquettes from trash to provide low-cost heat for cooking while safeguarding the environment.

By February, the committee’s ten members, who live all over the U.S. and gather in meetings on Zoom, had identified thirty applications that met the criteria. Then began the most time-consuming part of the process: the vetting, with committee members researching the applicant, contacting their two references, and learning as much as possible about the proposed project.

“We are looking to award the 2022 project grants in late April or May,” said Marsha.

Read about the 2022 grant recipients in the June issue of Connections.