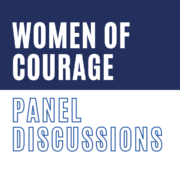 The U.S. Secretary of State’s International Women of Courage Award recognizes women from around the globe who have demonstrated exceptional courage and leadership in advocating for peace, justice, human rights, gender equality, and women’s empowerment, often at great personal risk and sacrifice.

In late March, the State Department announced two online panel discussions featuring five of the ten International Women of Courage honored in 2022. The awardees are participants of the International Visitor Leadership Program (IVLP), the U.S. Department of State’s premier professional exchange program, to cultivate lasting connections with their American counterparts. These are the women that AWIU will be honoring at our 2022 IWOC Celebration and supporting with a grant to continue their work.

The first discussion, hosted by the Georgetown Institute for Women, Peace and Security (GIWPS), in partnership with the U.S. Department of State, was on Wednesday, March 30, 2022. The GIWPS panel consisted of three 2022 awardees whose work defended human rights and advanced peace and security in the most challenging contexts. From Brazil, Burma, and Liberia, they shared their stories, strategies for effecting positive change, and recommendations to human rights defenders around the world and the international community looking to support their work.

Ei Thinzar Maung discussed her focus on putting women’s rights into the Burmese constitution. She said, “We must talk about this rights issue now, while fighting for democracy against the military coup. Otherwise, we will lose the opportunity – and this discrimination against women is not normal.”

Facia Boyenoh stated that her primary audience is women, but spoke of the necessity to bring men into the work so that they could serve as eventual change agents to tackle gender-based violence.

Simone Sibilio do Nascimento talked about how, in her role as the first woman to head the fight against organized crime in Brazil, she defended a woman who had been murdered, and how this was
“both a weight and a stimulant” for her. She also emphasized the importance of a woman heading the effort against organized crime, so that the community would take women seriously.

The second panel discussion, which took place on Thursday, March 31, 2022, was hosted by the United States Institute of Peace in partnership with the U.S. Department of State. Titled “Women, Climate Change and Peacebuilding,” this panel featured 2022 International Women of Courage Awardees Josefina Klinger Zúñiga and Rizwana Hasan, who have worked tirelessly to combat the climate crisis, promote environmental protection, and elevate the unique ways women and girls are impacted by the destruction of the environment. Furthering the discussion were Kamissa Camara, moderator, Senior Visiting Expert on the Sahel, U.S. Institute of Peace; Tegan Blaine, Director, Climate, Environment and Conflict, U.S. Institute of Peace; and Katrina Fotovat, Senior Official, Office of Global Women’s Issues, U.S. State Department.

Josefina Klinger Zúñiga works as a human rights and environmental defender and founded Mano Cambiada (“Changed Hand”) in Colombia to produce sustainable incomes and advance the rights of her community by training leaders on environmental resource management. She talked about nature’s generosity, and her focus on “writing a new story about climate change.” As a leader and teacher, she works with children and youth to create a new model for economic viability, relying upon social knowledge, not academic credentials. About her inspiration, she said, “I believe in small revolutions. My elders always said, when it’s most dark, the sun is going to rise.”

Rizwana Hasan is a lawyer who fights environmental and human exploitation in Bangladesh through the courts using a people-centered focus on environmental justice. She explained, “Ten million women are involved in food production in Bangladesh, over fifty percent of the population. They have become the managers of climate change by default, and they are the leaders of climate adaptation.” She also talked about the 1927 Forest Act, enacted by the British colonizers, which suppresses the rights of tribal people in favor of development, and the need for a paradigm shift in the use of natural resources.