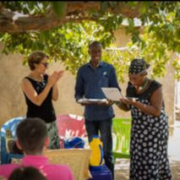 It is with great sadness that AWIU reports the recent news of the death of Stephen Marwa, a wonderful man many of you knew through his work as executive director of Hope Revival Children’s Organization in Tanzania. AWIU supported the compelling work Stephen was doing in the Musoma and Mara communities of Tanzania with six grants over a period of four years, from 2017 to 2021, all of which had a discernable and most positive effect on the women and children he worked with. AWIU members past and present who worked with him had this to say:

“Stephen was an incredibly gentle soul. He was passionate beyond words and gave everything he had to those around him, his spirit will live on in all through his life-changing work and all of the hearts he has touched, including mine.”
– Sophie McNally, Passport, who interviewed Stephen in February 2022

“Stephen was an extraordinary guy, always brimming over with plans to expand the impact of Hope Revival. His last big dream was to create a training center, spacious and equipped enough to accommodate the many training projects he developed since starting from scratch in 2014. His energy, warmth and hope were infectious – I always came away from talking with him with an upbeat, hopeful feeling. I know that in spite of losing his physical presence, he will continue to be an ongoing source of inspiration and love for his entire community.”
– Barbara Rubio

“My heart breaks for the loss of Stephen Marwa. For the past six years, Stephen has been my constant collaborator, but so much more. Over time, his vision for the women and girls of Tanzania, his dreams and work have somehow permeated my own. Despite the daunting challenges in communities and villages around the world, there are inherent assets and strengths that can be cultivated and nurtured. Stephen has shown us that empowerment is more than a concept or an idea.”
– Mara Huber, Associate Dean for Undergraduate Research and Experiential
Learning at the University at Buffalo, former AWIU member and current
partner of HRCO.