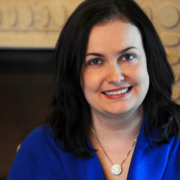 The American Women for International Understanding is honored to announce that the 2018 Internationalism Award recipient is Ana C. Rold, the founder and publisher of Diplomatic Courier, a global affairs media network. Ms. Rold is also an advocate for women’s global issues and a mentor to women leaders at home and abroad.The AWIU Internationalism Award is presented to individuals who have addressed concerns and issues facing women worldwide. The commitment and work of the individuals have set them apart by every standard. Recipients have exhibited international support for women’s issues and contributed to worldwide understanding, raised awareness of global concerns, and fostered and encouraged cross-cultural dialogue. AWIU will present the Internationalism Award at the International Women of Courage Celebration in Los Angeles on March 29, 2018.

Rold is also the Founder of Medauras Global LLC, a global communications firm for “The Connected Generation.” Medauras specializes in custom publications for organizations and institutions that are focused on a multitude of strategic concepts of national and global importance.

In 2012, Rold founded the global futuristic think tank, The World in 2050. The think tank has convened over 3000 multi-stakeholders in the private and public sectors, partners and futurists, through a series of global summits and forums, research papers and reports, and digital and print media, to stimulate discussion and solutions on seven megatrends, including infrastructure, jobs, transportation, food security, health, wealth, and future cities.

Since 2009 Rold has served as the Editor-in-Chief of the annual leadership publications of the G7 Summit (formerly the G8), the G20 and B20 Summits, and APEC Summit.  She covered and managed the editorial production of these publications for the summits in Italy, Canada, South Korea, the United States, France, as well as the G8 and NATO in the United States, the G20 in Mexico, and the APEC Summit in Russia.

In tandem with her publishing and editorial work, Rold has taught Comparative Politics and Political Science at Northeastern University’s College of Professional Studies since 2006.  At Northeastern, she has also served as Director of the Cyprus Program and co-Director for the Egypt Program for Northeastern’s Dialogue of Civilizations Initiative.

Prior to starting her career in international diplomacy and communications, Rold worked for the Center for Strategic and International Studies (CSIS), the UN Foundation (UNF), and the U.S. Institute of Peace (USIP).

Her advocacy and mentorship on behalf of women and women’s global issues extend around the globe.

In 2012, Ms. Rold was invited to serve as a Mentor for the inaugural cohort of women fellows of Mrs. Laura Bush’s Women’s Initiative at the George W. Bush Presidential Center and the George W. Bush Institute. The leadership program engages women around the world, with an initial focus on women from Egypt, focusing on helping the women develop leadership skills, exchange techniques, ideas, and expertise, and provide effective tools to empower women in the Middle East to be a force for change. The year-long program began in Dallas, and included visits and meetings in New York, Washington, DC and California’s Silicon Valley. Ms. Rold served in the program for one year as a mentor to a young woman from Egypt. In 2015, Ms. Rold interviewed Mrs. Laura Bush for the Diplomatic Courier magazine, where they candidly discussed the Women’s Initiative and the impact of the Fellowship for Women’s empowerment in the Middle East. Ms. Rold received a thank-you letter from President Bush and Mrs. Bush for her service on the program.

In addition, Ms. Rold has served as a Member of Women’s Democracy Network Advisory Council, chaired by Mrs. Cindy McCain, since 2011. The Council plays a vital role in galvanizing women to forge new paths to political leadership. Since its founding in 2006, WDN empowers women in more than 60 countries to participate in the political process and helps them gain the skills needed to take on greater leadership roles in government, political parties, and civil society. Ms. Rold has served on the Council by providing her expertise in convening and advising women leaders from around the world in media training and leadership skills.

As part of her position at WDN, in 2012 and 2016 Ms. Rold provided pro-bono services to a group of women leaders from Afghanistan and Pakistan through a program funded by USAID called Pakistan-Afghan Women’s Forum for Peace and Democracy (PAWFPD). Since 2001, militancy and terrorism have grown in Afghanistan and Pakistan destabilizing all socio-political and economic efforts at bringing stability and prosperity to both countries and the region. A group of women leaders from the policy, media, and private sector came together to discuss powerful women’s voice in effecting peace in the region. Ms. Rold, through her formal background in peace and conflict resolution served as a convener and mediator to the groups’ two meetings—one in Istanbul and one in Dubai. During the meetings, Ms. Rold held a negotiation and mediation skills training for the women. In the 2015 meeting, Ms. Rold served as the editor and publisher of a policy brief that was produced by the women leaders. The Women, Peace and Security Policy Brief was published pro-bono through Ms. Rold’s publishing company to an audience of influencers worldwide.

Since its founding, Diplomatic Courier magazine has recognized global women that have made significant contributions in their respective fields during International Women’s Month. The magazine has published several dedicated editions to women and girls, including acclaimed editions such as “Empowering Girls in the Digital Age”,  “Feeding the Planet, Empowering Women”, as well as a book on “Engaging Women in Kapisa Province”, a study conducted by Social Scientist of the U.S. Department of Human Terrain Systems, Ms. Naheed Vadsaria.

In her leadership capacity at Diplomatic Courier, Ms. Rold has provided pro-bono advertising and sponsorship to women’s health initiatives such as the Susan G. Komen Race for the Cure. She has hosted a group of First Ladies from Africa for a conference at NASDAQ discussing women’s maternal health (September of 2012), as well as host and moderate a foreign female ambassadors conference in 2010, while she was nine months pregnant. She loves to mentor and regularly host young girls at the National Press Club, such as the next generation of women leaders from Wakefield High School.