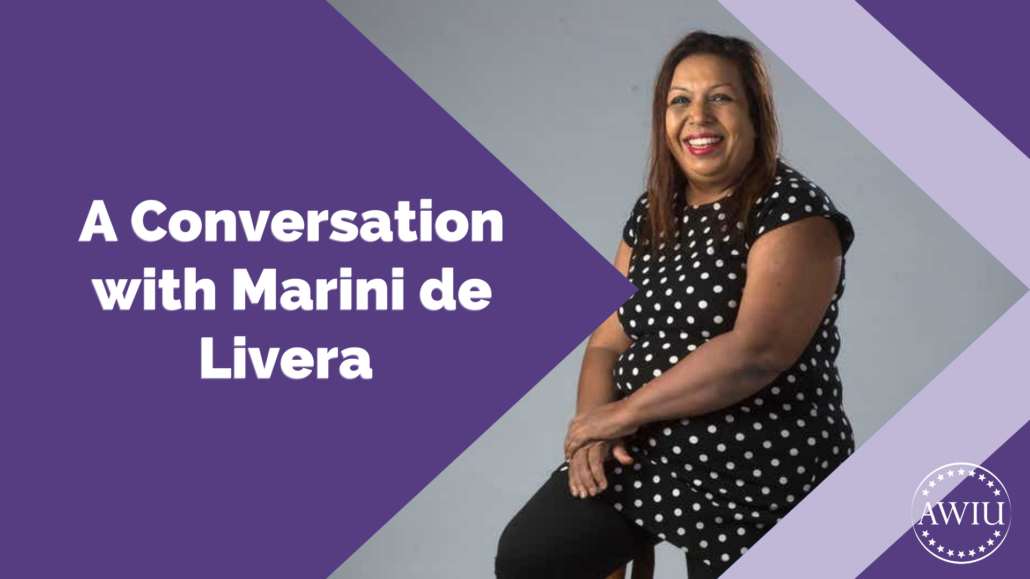 Marini de Livera is a crusader, one who aims her powerful weapons of pro bono legal services and training in the arts against the exploitation of women and children in Sri Lanka. For her efforts, she was awarded the annual International Women of Courage (IWOC) Award by the State Department and American Women for International Understanding (AWIU), one of 10 women worldwide to be so recognized in 2019.

She spoke at length with AWIU members in a Zoom Conversation the organization hosts monthly to raise awareness of its female rights and welfare causes, including International Women of Courage award recipients as well as female-led non-profit organizations to which it awards micro-grants.

Marini spoke about her work training social workers who serve the children in Sri Lankan orphanages. She explained that the country does not have a system of foster care, so orphanages are the only resort for “parentless” children. She is currently fighting for reform on this issue with the Council of Ministers. “Interestingly, many children in our orphanages have two, or at least one, living parent. If a parent leaves the country to work in the Middle East, it’s quite common to place the child in an orphanage, and the parent or parents can be gone for years.”

Nancy Annick, an AWIU member, attorney, and chair of the 2019 IWOC Celebration where de Livera received her award and grant, asked where de Livera wanted to take foster care in Sri Lanka, and how she started down that path. “I introduced the concept of foster care in Sri Lanka,” explained de Livera. “In a case where a child had resided with a foster mother since birth, I argued that the interests of the child should take precedence, not the interests of the adult, a new concept for Sri Lanka. I am proud to say that the child was returned to her foster mother. By my submission in court, I managed to get a wider judicial interpretation to the term ‘fit person’ to include a Foster Parent in the Children’s and Young Person’s Ordinance, the law that covers vulnerable children in need of care and protection. This was a huge triumph.”

In response to a question by AWIU member Barbara Rubio about de Livera’s use of street theater to educate people about human rights, De Livera explained that she had created a huge bird mascot, “A kind of myna bird that is so common in Sri Lanka, known to everyone here as bindu malli, very chatty and approachable,” to be the voice behind her messages. She has painted Bindu Bird on bus stops, and produced children’s books that are handed out at the street performances. “If a child is in trouble, the bird will fly down and speak with them. Bindu Bird tells the children not to be despondent, that there are people who can help them.”

AWIU member Kathleen Roche-Tansey, former chair of the international Affairs Board for the City of San Diego and founding president of the San Diego Sister City Association, wanted to know if, post-war, people were able to move freely throughout the country. De Livera said yes. “Our society is trying to build bridges, creating peace advocates among children. We use English as a link language, so the conflict does not surface in the two languages that formerly divided us.”

In closing, de Livera noted how grateful she is today. “I appreciate the State Department and AWIU recognition. No one knew me before the IWOC award! It gave value to the work I am doing.”