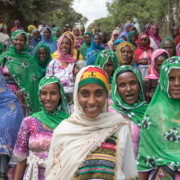 An Article By One Of Our Delegates, Joan Poulas, to Ethiopia:

Our trip to Ethiopia was far different from what we had expected. Most of us did not realize that this is NOT an Arab country; nor is it even primarily Muslim. Instead we found a country trying very hard to be peaceful and celebrating the baptism of Christ as the beginning of Christianity. We saw the churches that were being used during the time of Jesus; and saw where Mary and Joseph had come. No one was pushing the religion, or any course of conduct, except to try to follow their national motto: BE KIND.

We saw very poor people struggling to learn to read. We saw children with English alphabet books and teachers that stressed health and sanitation in their very crowded classrooms.

Ethiopia is a very poor country. We did not go to the south, where the tribes are more active. In the north there is little malaria; few mosquitoes. We saw national parks full of baboons and beautiful rock formations. We saw more park rangers than we see in our own parks. They were charged with double duties: protect the park and the baboons, help the tourists enjoy the park, which included prevented them from being pestered to buy handicrafts from children who should be in school (and were told as much by the rangers.)

Ethiopia is a rugged country. The monastery we visited was difficult to access and the subterranean churches were very difficult. We came away with a new sense of a very ancient culture which is desperately trying to maintain the peace and educate their children. The dedicated medical personnel we saw had outmoded instruments, few amenities but a strong commitment to save babies and mothers and keep their patients as comfortable as possible in difficult surroundings.

We saw strong leaders trying to convince tribes to abandon female mutilation; leaders trying to teach rural parents that young girls ought to be able to go to school and not be traded away for marriage at a very young age.

The prevailing feeling we evidenced was that this was a country trying very hard to improve the life of its citizens and to avoid the hostilities that their neighbors suffer. They live their motto, BE KIND, and we wish them the very best.

IWOC Celebration 2016: An Electric Evening for the “Sisters of Courage”