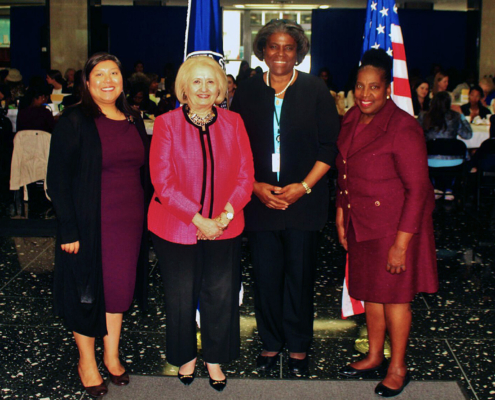 Wednesday, April 19th the AWIU in conjunction with the U.S. Department of State hosted the third annual Career Opportunities for International Relations Symposium. The initial program convened in the Loy Henderson Auditorium. After registration AWIU President Carol Lopez welcomed the more than 150 women to the event. Shawna Thomas of Vice News then proceeded moderate the Women Impacting the World Conversation.  Ambassador Linda Thomas Greenfield, a Senior Fellow at Georgetown University’s Institute for the Study of Diplomacy, Dr. Jacqueline Wilson, Principal, Civic Fusion International, along with Sheila Crowley, Acting Director of the Peace Corps shared their personal insights and experiences as professionals in the realm of global interactions.

The second phase of the program was the Interagency Panel. Retired, Senior Foreign Service Officer, Ramona Harper moderated the panel including Noreen Jameel of Vice Media, Naomi Pizaro of the National Endowment for Democracy, Evelyn Rodriguez-Perez of USAID, Andi Gitow of the United Nations Information Center, and Desiree M. Cormier of the Albright Stonebridge Group. Beyond the personal testimonies shared by the panelists, guest were able to ask questions of both panels and engage on an even deeper level. After a short break, guest met alongside the panelists in the Exhibit Hall for lunch. Keynote Speaker Melanne Verveer, the Executive Director of Georgetown Institution for Women and Peace and Security, spoke on her work on foreign policy initiatives as well, her experience traveling to nearly 60 countries to promote the economic advancement and social elevation of women and girls around the world. Guest later received a copy of Fast Forward: How Women Can Achieve Power and Purpose, a book co-authored by Melanne Verveer. Guest then broke out into groups the Networking/ Mentor groups where they met with professionals who were experts in their given fields. COIR founder and AWIU member Diane Mitchell Henry along with Co-Chair Judy Torres, a Recruiter for the U.S. Department of State gave closing remarks followed by a tour of the U.S. Diplomacy Center.