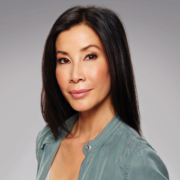 “There is no doubt that these are extraordinary women, but they are also ordinary women, seeking health and safety for themselves and their families, and peace and justice for their communities and countries,” declared award-winning journalist Lisa Ling, as she introduced the Secretary of State’s 2021 International Women of Courage. “Circumstances have forced them to speak up and speak out. Courage has brought them here today.”

Ms. Ling, who is the host of CNN’s This is Life with Lisa Ling, had the opportunity to interview five of the International Women of Courage (IWOCs) for the 2021 International Women of Courage Virtual Celebration. The Celebration was hosted by American Women for International Understanding (AWIU) in collaboration with the U.S. Department of State. AWIU particularly thanks Inga Litvinsky of the Office of Global Women’s Issues and Sarah Belousov of the Bureau of Education and Cultural Affairs.

Circumstances have forced them to speak up and speak out. Courage has brought them here today.

This year marked the 15th anniversary of the Secretary of State’s International Women of Courage Award which recognizes women from around the world who have demonstrated exceptional leadership and courage in fighting for peace, justice, human rights, gender equality and women’s empowerment, often at great risk and sacrifice to themselves. Since 2008, AWIU has been honored to partner with the U.S. Department of State not only to celebrate these courageous women with an annual event, but also to support their work with monetary grants and to maintain a connection with them when they return to their home countries. This global sisterhood now extends to over 155 honorees from over 75 countries. The 2021 Awardees include Maria Kalesnikava (Belarus), Phyoe Phyoe Aung (Burma), Maximilienne C. Ngo Mbe (Cameroon), Wang Yu (China), Mayerlis Angarita (Colombia), Julienne Lusenge (Democratic Republic of the Congo, Judge Erika Aifan (Guatemala), Shohreh Bayat (Iran), Muskan Khatun (Nepal), Zahra Mohamed Ahmad (Somalia), sister Alicia Vacas Moro (Spain), Ranitha Gnanarajah (Sri Lanka), Canan Güllü (Turkey) and Ana Rosario Contreras (Venezuela). The Secretary of State also presented a posthumous group honorary IWOC Award to seven Afghan women who were assassinated in 2020 while serving their communities.

We will stand with you as we build a brighter future for us all. 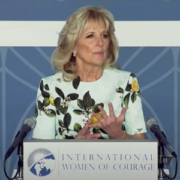 The 2021 IWOC Virtual Celebration premiered on April 29, 2021, on a hosted AWIU microsite. The virtual program was produced by Emmy Award-winning entertainment company Herzog & Co. ABC Congressional Correspondent Rachel Scott was the virtual host of the Celebration, and Willow Bay, Dean of the USC Annenberg School for Communication and Journalism, was the Honorary Chair. The program included highlights from the State Department’s 2021 International Women of Courage Ceremony, with remarks from First Lady Jill Biden, Secretary of State Antony J. Blinken, and Senior Official for the Office of Global Women’s Issues Katrina Fotovat. Ambassador Melanne Verveer also sent words of congratulations to the 2021 IWOCs and saluted AWIU for its long-time engagement celebrating the IWOC Awardees. The virtual platform allowed for a broad global audience with participants watching from ten countries, including the U.S., Somalia, Guatemala, the United Kingdom, Kenya, Turkey, Brazil, and the Democratic Republic of the Congo.

They need to prepare another way for them, another life for them, and education is the clue. 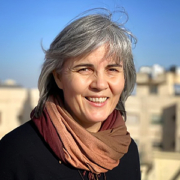 The heart of AWIU’s IWOC Celebration always is hearing the Awardees’ stories. Lisa Ling spoke with the IWOCs from Spain, Venezuela, Sri Lanka, Guatemala and Iran. Awardee Sister Alicia Vacas Moro is a Spanish nun who has been living in the West Bank outside of Jerusalem. She works with the indigenous Bedouin community providing training programs for women, schooling for children, and healthcare for the community. Ms. Ling asked Sister Alicia why she was focused on that area and that community. Sister Alicia explained that her religious order has been working in the Middle East for more than 100 years, and they realized that these displaced transient shepherds were neglected by both the Israeli and the Palestinian governments. But the Bedouins’ way of life is changing. “They always ask for education. This is their main concern,” said Sister Alicia. “I think somehow they are aware that their children will not be Bedouin anymore, that they need to prepare another way for them, another life for them, and education is the clue.”

Venezuelan women are on the front lines of this fight, and we know that we will be like the Phoenix and rise from the ashes. 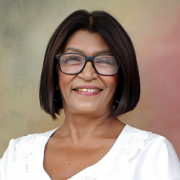 Venezuelan Awardee Ana Rosario Contreras is president of the Caracas Nurses’ Association, where she advocates for the rights of women, labor unions, and medical health professionals, in the face of the repressive dictatorial regime. Ana Rosario explained to Ms. Ling that the global pandemic has exacerbated weaknesses in the Venezuelan system, including insufficient salaries, lack of protective equipment, and inadequate food supplies. “Right now, we need humanitarian assistance,” implored Ana Rosario. “We need PPE, medicine and especially large amounts of food in order to deal with the hunger that so many Venezuelans are facing.” Yet Ana Rosario concluded on a positive note, “Our people are brave, and we are currently fighting for what is most important – for our freedom. And Venezuelan women are on the front lines of this fight, and we know that we will be like the Phoenix and rise from the ashes.”

We all have to work together to create a change, and then upgrade the standard of the PTA to international level. 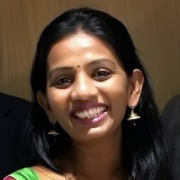 As a human rights lawyer from Sri Lanka, Awardee Ranitha Gnanarajah has dedicated her career to helping victims of enforced disappearances and prisoners detained without charge under Sri Lanka’s Prevention of Terrorism Act (PTA). Ms. Ling asked Ranitha what happens to people who are imprisoned under the PTA. Ranitha explained that detainees can be held for more than 18 months with limited access to lawyers and family members, and they can be tortured and intimidated into making a confession. She declared, “I want the world to know that the PTA, Prevention of Terrorism Act, affects every one of us in the country of Sri Lanka. It is used as a tool to silence any voice of dissent by the opposition.” Ranitha urged, “We all have to work together to create a change, and then upgrade the standard of the PTA to international level to ensure the rights of the prisoners for fair trials, natural healing, and to make sure the new process is being followed up.”

I continue to do this work because of the victims. 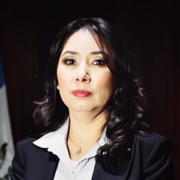 Guatemalan Awardee Judge Erika Aifan is a High-Risk Criminal Court judge who has presided over high profile corruption and war atrocity cases, leading not only to defamation, but also to threats of violence against her. Lisa Ling asked Judge Aifan what keeps her going with all the security concerns and threats to the rule of law. Judge Aifan replied, “I think first and foremost is the belief in justice.” She went on, “Despite all the risks, the threats and the challenges, I consider this position as judge to be that of privilege, and I have to think to myself, if my safety is at risk, what does that say about the safety of the victims? And so I continue to do this work because of the victims.” When asked what the IWOC Award means to her, Judge Aifan stated, “It’s not a recognition for myself, it’s more so a recognition for the women of Guatemala, the courageous female judges of Guatemala. It’s also a symbol of hope . . . that we can have peace, we can have justice, and we can have gender-inclusion in my country.”

I know there are many Iranian women who are more courageous than me, and I feel that they deserve more than me to receive this award. 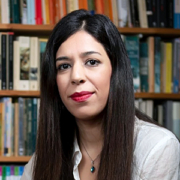 Awardee Shohreh Bayat is a Category A international chess arbiter from Iran, who was photographed at the 2020 Women’s Chess World Championship without her hijab. Refusing to apologize to the Iranian government, Shohreh sought refuge in the UK where she still lives. Lisa Ling inquired what life is like for women in Iran. Shohreh replied, “Actually, women don’t have the basic rights, like if a woman wants to travel, she needs either the permission of her father or the permission of the husband.” Ms. Ling asked if people in Iran are frustrated with the control of the government. Shohreh stated, “What the world needs to know about Iranians is that Iranian people are extremely liberal. They said if I get a chance to ask what they want, they want to have free internet because every time that something happens in Iran, the government controls the means of communication for them.” When asked why she did not apologize to the government, Shohreh explained, “I know there are many Iranian women who are in prison because of protesting against hijab. And if I would apologize and come back to Iran, how could I look at the eyes of Iranian people?” Finally, Ms. Ling asked Shohreh what the IWOC Award means to her. She replied, “I’m honored to receive this award, but on the other hand, I know that there are many, many Iranian women who are more courageous than me, and I feel that they deserve more than me to receive this award. But I know that many of them are in prison or are not in the situation to be here and receive this award, but I would love to share it with all of them, and I would love to tell them that ‘You are the brave one, and I’m so proud of you.’”

I’m truly thrilled to accept this award on behalf of Deloitte. And I can assure you that we will continue to innovate and support a diverse, equitable and inclusive culture. 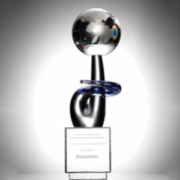 AWIU also presented its 2021 Internationalism Award to Deloitte. Deloitte was selected because it stands apart as one of the first companies to recognize the necessity for empowering and advancing women in business. The result is transformational work in addressing issues of diversity, equity and inclusion in both the U.S. and the global workplace. Terri Cooper, Deloitte’s Vice Chair of External Diversity, Equity and Inclusion, accepted the award on behalf of Deloitte. Ms. Cooper congratulated the 2021 International Women of Courage and acknowledged their achievements and their profound impact globally. She went on to recount that Deloitte started its Diversity & Inclusion journey almost three decades ago both to focus on the retention of women and to increase the representation of female leaders. Deloitte continues today to be visible and vocal in its commitment to making gender equity the norm in all parts and all levels of its organization. She concluded by saying, “I can assure you that we will continue to innovate and support a diverse, equitable and inclusive culture within Deloitte and within our communities.”

The Global Leadership Sponsor of the 2021 IWOC Virtual Celebration was Deloitte for its 11th consecutive year. A leader on the global stage, Deloitte is committed to fostering a culture of inclusion, embracing the idea that a diversity of perspectives helps us look deeper to find answers. Additional corporate sponsors included The Walt Disney Company, ACE Health Foundation, BJ’s Restaurant and Brewhouse, and Goldman Sachs.  Media Sponsors included Herzog & Co., Nomad, and Shaman Design.