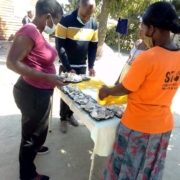 International Woman of Courage Dr. Rita Nyampinga has been busy since returning to Harare, Zimbabwe from her stateside visit in 2020 to collect her IWOC award. On June 18th, she shared what she’s been doing with women recently released from prison in a Conversation with AWIU members and friends.

Known for her advocacy on behalf of female prisoners, Dr. Rita is the recipient of two awards for her activism: “Female Human Rights Activist of the Year” by Alpha Media House in 2014, and two years ago, the International Women of Courage award. She is currently the Social and Economic Justice Ambassador for Zimbabwe’s Coalition on Debt and Development.

Dr. Rita explained that she is using the IWOC grant she received from AWIU to fund a mushroom farming project for 15 former female prisoners. For the 35-year activist, it’s all about providing these women with the capability to control their own lives through economic empowerment. Says Dr. Rita, “Without money, someone else controls your life for you.”

It was in Tulsa, Oklahoma, where she visited a women’s prison, that Dr. Rita dreamed up her program of economic empowerment. “In Zimbabwe, when women come out of prison, they are ostracized by their families and friends,” she explained. “Many of these women were imprisoned for public demonstration, which you cannot do without police clearance.” Having been imprisoned herself, Dr. Rita was well-acquainted with the prison system and the aftermath of rejection and despair when she came out.

In the 18 months since the start of the mushroom cultivation project, 15 women have reintegrated into their communities via mushrooming and gardening. “I provided the equipment they needed, engaged a trainer, and got them started,” she said. They work in groups of five, and have received business training to learn accountability for the funds they raise from selling mushrooms.

The women also receive psycho-social counseling, a critical service in Dr. Rita’s eyes. “Our process is about reintegration, rehabilitation, reconciliation, and restoration,” she said. “Restoration occurs when the women work and generate income. Once this happens, they are accepted by their families and communities.”

A success story close to Dr. Rita’s heart: “One of these women started growing tomatoes. She has built a house and sent eight children to school on the proceeds. She is head of her family and an accepted member of the community now.”