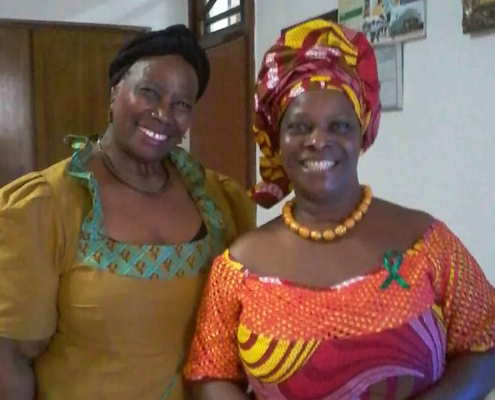 The prominent African American Scientist, Inventor, and Botanist George Washington Carver once said, ‘Where there is no vision, there is no hope.” Joyce Nkausu, the Grocer had a vision to start her own business. She opened a Cantemba (Grocery Store) in Kanakantepa. With initial funding from the Los Angeles-Lusaka Sister City Committee (LALSCC) Joyce was able to turn her vision into a reality. Joyce applied for a microloan from the LALSCC and committed herself to the criteria of mentorship, training, responsibility, and paying it forward. The Women’s Entrepreneurship Microfinance Program was conceptualized by Dr. Earnestine Thomas-Robertson, President/Chair of the LALSCC. Under her leadership and Ms. Lidia Mongerie-Brown, Project Director, a committed and exceptional member of the LALSCC, Joyce was trained about more importantly mentored. With Ms. Mongerie-Brown’s guidance, Joyce was able to pay the loan back and pay it forward, a true testament to the qualifying criteria of LLSCC and mentorship of Ms. Lidia Mongerie-Brown. Initially the day to day operations were challenging, her husband had to ride his bicycle (5 kilometers) from Kanakantepa where her store is located to Chongwe and back to replenish the goods for Joyce’s Cantemba. Certainly, the entrepreneur was constantly concerned and hopeful that her husband did not get a flat tire along the way, and finding it harder, with goods in hand, on the way back than on the way in order to collect goods. Although the journey was arduous, the journey was necessary to the vision. Her progress continued in spite of the challenges at Barclay’s Bank. Her journey and the vision elevated to a far more significant level in 2016 with the support of the American Women for International Understanding (AWIU) Organization.

In 2016 Ms. Mongerie-Brown returned to Lusaka to continue with the work of the LLSCC, part of that work was to reevaluate the progress of Ms. Joyce Nkausu and her grocery store. Over time Joyce had made, paid back, and saved enough Kwacha ($) to restock her Cantemba every six weeks rather than every two to three weeks, saving time, money and managing a far more efficient business. With a funding augmentation from AWIU in 2016, Joyce Nkausu (the Grocer), at 24 years of age, was able to hire a Van to transport a far more substantial amount of purchased products increasing inventory with a longer shelf life. This freed up and further increased her husband’s capacity to redirect his energy into growing more fresh vegetables to sell and reduce the need for frequent travel to Chongwe to obtain staple goods and vegetables to sell. This augmentation for entrepreneurial improvement allowed for more profit for the Cantemba, conserving time and increasing the labor efficiency. Thus, fewer bike rides, less worry about safety carrying items on the bike for Joyce. Joyce the grocer by way of her vision, along with her husband and two children, has become a mainstay entrepreneur in her community. As she has done before, Joyce is expected to have completed repayment of her AWIU fund by in September of 2017. It should be noted that Barclays’ Bank policy regarding minimum balances have changed. Joyce was a victim of that policy change, but struggled through it with sparkling success. You will read more about that later when we tell you about the new Seamstress/Dressmaker. Ms. Joyce has extended an invitation to AWIU and LA-Lusaka to visit her Cantemba any time.

In 2011 the Los Angeles-Lusaka Sister City Committee’s Women’s Entrepreneurship Program funded a startup business for Ms.Dorothy Kasongo, a skilled dressmaker in the Matero area of Lusaka, Zambia. Ms. Kasongo’s microloan funded a Sewing Enterprise. With the initial funds she purchased a sewing machine, fabric and filled requests from where she found her initial market, the home of her faith, the church. She cut patterns, designed garments, hemmed clothing, and made apparel for members of her church. There are still places in the world where people think that it is important to present themselves’ well dressed in a place of worship. Ms. Dorothy, however, also designs clothes and sews garments for all dress occasions.

Once again following the criteria of the LLSCC, the training program set forth, paying forward on her microloan in a timely fashion so yet another woman in Lusaka could benefit from the turnover of funds. Ms. Dorothy is another success. She was able to train and hire staff to cut patterns, hem clothing, mend and alter clothing, in effect she created a couple of permanent jobs and about 11 revolving jobs, all becoming integral to the success and sustainability of her enterprise and the Women’s Entrepreneurship Program designed by the Los Angeles-Lusaka Sister City Committee. Ms. Dorothy has become an invaluable touchstone for her church and the community. Her first bank account was opened at Barclays Bank upon receipt of the microloan in 2011. She paid her loan back in 2013 opening an avenue so a new partner would be able to participate in 2016.

Ms. Dorothy’s success paved the way for another Seamstress to turn her Sewing Skills into an established business and training program funded by AWIU. Her name is Elizabeth Myambi. Mrs. Myambi started out sewing by hand some years ago and later secured an old used sewing machine. Ms. Elizabeth used her AWIU funds to purchase an upgraded Sewing Machine and to purchase a stock of popular fabrics to design and sew apparel for work, school, and church venues. With the new Sewing Machine, Ms. Elizabeth has committed to training three young ladies is the art, skill, and business Of dressmaking, patterns, hemming and mending garments. In two years we expect one of the three Trainees to go into business and hire one Assistant Seamstress. A photo of Ms. Elizabeth can be found in the AWIU Photo Album provided for your records. A receipt for funds she received can be provided if you like for each AWIU recipient. The new Bank Policy at Barclays Bank has changed, so all Los Angeles-Lusaka Projects are processed through one umbrella Account now in the name of Mrs. Bulawayo, our local Point Person with oversight for all Microfinance Projects in Lusaka Zambia. Print outs from the bank will be sent to me. All repayment funds go into that one account as the new requirements indicate there must be a minimum balance of $ I ,000 Kwacha and the name of a Sponsor must be on the Account. The LA-Lusaka Team had to rethink how to maintain the account minimum balance while the women could still have working capital to carry on their businesses. The Bank, for lack of a nicer term, seized the little money some of the ladies had in their individual accounts since they often had such a miniscule minimum balance. We had to come up with another way around that block.

In a 2016 Partnership the American Women for International Understanding (AWIU) organization and the Los Angeles-Lusaka Sister City Committee developed a Goat Farm in Lusaka, Zambia via the Women’s Entrepreneurship Program (Micro Finance). Starting from scratch, the farm was built to include a facility to house the goats on land specifically for that purpose. A block wall and fencing was erected with AWIU funds to ensure some boundaries on the land where the goats would have extensive room to roam, yet confined to some degree, to minimize loss and theft. AWIU funds were also used to purchase one male goat and six female goats. The hope is that this Goat Farm will be a source that produces milk, cheese, and meat as gauged by the local market. The farm can be a valuable part of a sustainable environment. Goats can also be used for control of weeds and brush to help utilize a pasture’s diversity. Three women partners share this Microfinance Project. They are Ms. Anna Festers Zulu (who is also a Cook),

Ms. Mable Chansa, and Ms. Cleopatra Mumba, under the supervision of Mrs. Mary Bulawayo who oversees this project and the land. Working in a cleaning/maintenance capacity on the Goat Farm is Mr.Stephan. Ms. Zulu, Ms. Chansa, and Ms. Mubma will focus on this project and bring it to complete fruition as they now wait for the goats to reproduce and multiply. Photos in the AWIU Photo Album will show start to finish of the project, including goats purchased and the shack built for mating/breeding.. -understood. The temporary sign will be done more professionally when we can afford it. But for now the sign reads LA-LU SC and AWIU GOAT Farm. Repayment is expected to be completed by October of 2018.

In a separate area, but on the same piece of land on Tokyo Way in Lusaka, is the AWIU funded Chicken Farm. This farm is the second Chicken Farm endeavor for the Los Angeles-Lusaka Sister City Committee. Ms. Sharon Phiri is the Entrepreneur of this Chicken Farm with dual funding from AWIU and LA-Lusaka. As one will see from the Power Point presentation and photos, Feeding Containers for the Chickens have been installed and Ms. Phiri is expected to complete repayment of her loan in one year, October of 2017 whereas the Three Goat Farm Entrepreneur Partnership is expected to complete repayment in two years, October of 2018. These Broiler Chickens will sell at Tuesday Marketplace, a local Cantemba (Grocery Store), and also supply a local

Restaurant. The Chickens were not purchased in August when Lidia arrived as there was an epidemic with Chickens coming from China. So the Vet advised that we wait and we did. Chickens were purchased prior to Lidia leaving in October.

Again, with AWIU funds, a small sustainable Agribusiness Farm is being developed. From the photos in the AWIU Album, one can see how the land has been cleared, graded off, and you can see Mr. Zimba, the Helper to the the Entrepreneur herself. The emphasis of this business is on leafy green vegetables. Instead of two women, we found it necessary to engage the services of one man, Mr. Zimba in that Ms. Grace could not plow and plot the Ian necessary to plant the vegetables. She can plant, dig with a shovel, work with the hoe and other garden tools, but not the plowing and plotting required to have a successful farm/agribusiness. When the crops produce, there will be additional (seasonal and evolving) jobs for picking, cleaning, and distributing produce.

In the AWIU Photo Album is a letter and photo of our second to the youngest of our Entrepreneurs, Ms. Hellen Chanda. Los Angeles-Lusaka Sister City Committee’s Women’s Entrepreneur Program first funded Ms. Hellen in 2013. She has already demonstrated initiative and determination as she had a small business selling scones at Tuesday Marketplace in 2011, Lusaka, Zambia. LA-LUSSC funded her first expansion and improvement in 2013. AWIU funded her business expansion in 2016. The funding was in perfect time for Ms. Hellen to increase business and thereby profits to feed and school three adopted orphans. Ms. Hellen is the Eggs and Potatoes Entrepreneur. With AWIU funds she has added Chicken and Chips to her menus at the Tuesday Marketplace. Her Food Stand provides popular quick and healthy dishes every Tuesday. She purchases the eggs from another vendor who is in the business of Chickens and now she is buying chickens and preparing that dish and fries at the Food Stand she started in 2011. In addition to taking on the responsibility to feed orphans and sending them to school, Ms. Hellen has created, at least 5 jobs since 2013 and is now helping her Sister Naomi develop a store to sell apparel.

We thank American Women For International Understanding (AWIU) for the grant -it promises to be an excellent international endeavor in partnership with the Los Angeles-Lusaka Sister Committee.

Mellody Hobson to be Honorary Chair of the International Women of Courage...