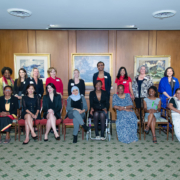 At the 10th Annual International Women of Courage Celebration, Ms. Fadia Najib Thabet of Yemen, an activist working to reintegrate former child soldiers of Al Qaeda and Houthi militias into society, brought the crowd to their collective feet when she declared, “The women sitting in front of you have all fought. We have chosen to tell our stories with compassion, resilience and bravery. To all the women here, you are part of our journey and fight. Each of us has a mission to accomplish. We still have a lot to do. But this time I am not going to walk alone. We will walk side by side. Holding each other’s hands. We are feminists, we are powerful, we are intelligent and we are a movement.”

Her stirring speech was one of the highlights of this year’s International Women of Courage Celebration hosted by the American Women for International Understanding (AWIU) held April 6, 2017 at the Jonathan Club in downtown Los Angeles to a sold-out crowd of 280. This year marked the second time the AWIU event was held in Southern California in collaboration with the Secretary’s Office of Global Women’s Issues and the Bureau of Education and Cultural Affairs at the U.S. Department of State, and the International Visitors Council Los Angeles. The standing ovation underscored the warm, supportive and electric atmosphere of the evening as AWIU honored 13 International Women of Courage (IWOCs), 10 in attendance, for their work against gender-based violence, government corruption and the effects of long-term war on women and children.

Fellow IWOC honoree, Ms. Rebecca Kabugho from the Democratic Republic of the Congo, recognized for her key role in a series of peaceful protests demanding that the Congolese government hold credible elections, reiterated Ms. Thabet’s sentiments. She spoke about the strong bond the 2017 IWOCs shared and how that sisterhood was an invaluable tool for moving forward in their work. Speaking about her hopes for the future of her country, Ms. Kabugho said, “I hope that all the women who are here will fight to change their countries. We can change the Congo. We can change the world. Without us, it will not be done. Hand in hand, we will make the world a better place.”

See the complete list of 2017 Secretary of State’s International Women of Courage.

The International Women of Courage Award was established by the U.S. Department of State in 2007 to honor women who demonstrate exceptional courage in making a substantial difference in the lives of others around the globe. Honorees traveled to the United States for an award ceremony at the U.S.Department of State in Washington, D.C. in late March and then traveled individually to different states on an International Visitors Leadership Program. At the end of their visit to the United States, the IWOCs then reconvened in Los Angeles for a debriefing, a panel presentation and the AWIU IWOC Celebration.

On hand from the U.S. Department of State to introduce the International Women of Courage was Ms. Betty Bernstein-Zazba, Senior Advisor and Director of Operations in the Secretary’s Office of Global Women’s Issues. “Each woman’s story is an inspiring reminder of how individuals can make a difference. Taken together, they provide a powerful message of courage and leadership. Women can make a difference in promoting greater peace, economic growth, and progress.” Joining Ms. Bernstein-Zabza was her colleague from the U.S. Department of State, Ms. Stacy White, the Director of the Office of International Visitors in the Bureau of Educational and Cultural Affairs.

Other highlights of the night included the presentation of AWIU’s Internationalism Award to Ms. Anita DeFrantz, the first American woman and the first African American to be named to the International Olympic Committee. Ms. DeFrantz was honored for her lifetime of work to increase opportunities for women around the globe through sports and for her advocacy against slavery. Ms. DeFrantz could not be at the event because she was travelling in support of the LA2024 Olympic Bid, but in a video she expressed her thanks to AWIU and her admiration for all the International Women of Courage, adding, “You lift me up.”

The Bernice Behrens Founders Award was given to Diane McGlinchey by AWIU president Carol Robertson Lopez. Diane McGlinchey has been a dedicated member of AWIU for over a decade, serving in almost every role including President. Her commitment to the work of AWIU flows from a lifetime spent in service to fellow women and to her country. She thanked fellow AWIU members for their service and their friendship, adding, “Let us move forward knowing that the collective power of women—well organized, passionate and respectful—is unstoppable.”

Honorary Chairwoman Mellody Hobson of Ariel Investments, also sent a video, addressing the IWOCs directly saying, “Your stories of grit, determination, perseverance and courage are reminders to all women that with a measure of bravery, you can change the world. And they are stories that need to be told.”

As part of AWIU’s mission to build bridges of international understand and support women’s causes, the organization provided each honoree with a grant. In honor of AWIU’s 50th anniversary year, the grants for 2017 International Women of Courage were our largest ever, as a sign of the organization’s half-century commitment to of improving the lives of women all over the globe. Event Chair Maggie Sabbag thanked all the guests for their vital support, “We are deeply grateful to our sponsors and patrons. Because of their generosity, AWIU awards each woman a monetary grant to continue her good work and make a positive difference in our world. Many thanks for supporting the Celebration and all the good that flows from it.”

The event was made possible through the support of sponsors committed to global issues, including a number of AWIU members. A special thanks to Madvi Raya for committing at the Freedom & Equality Level and members Nancy Annick, Martha A. Atherton, Susan Chandler, Carole Lewis, Onma Lwin, Cynthy Moffatt, Maggie Sabbag and Jane Mursener Wetzel for contributing at the Empowerment through Education level.

AWIU member and Mistress of Ceremonies Cynthy Moffatt said afterwards, “From start to finish, the evening was charged with enthusiasm, passion and admiration for the International Women of Courage. The guests loved being able to interact with the honorees one-on-one and hear their stories and personal messages firsthand. The experience was eye-opening for so many of us and incredibly moving and inspiring. I think the sustained standing ovation all received at the conclusion of the program really touched the honorees.”

Delegation Book in honor of our 50th Anniversary
Scroll to top