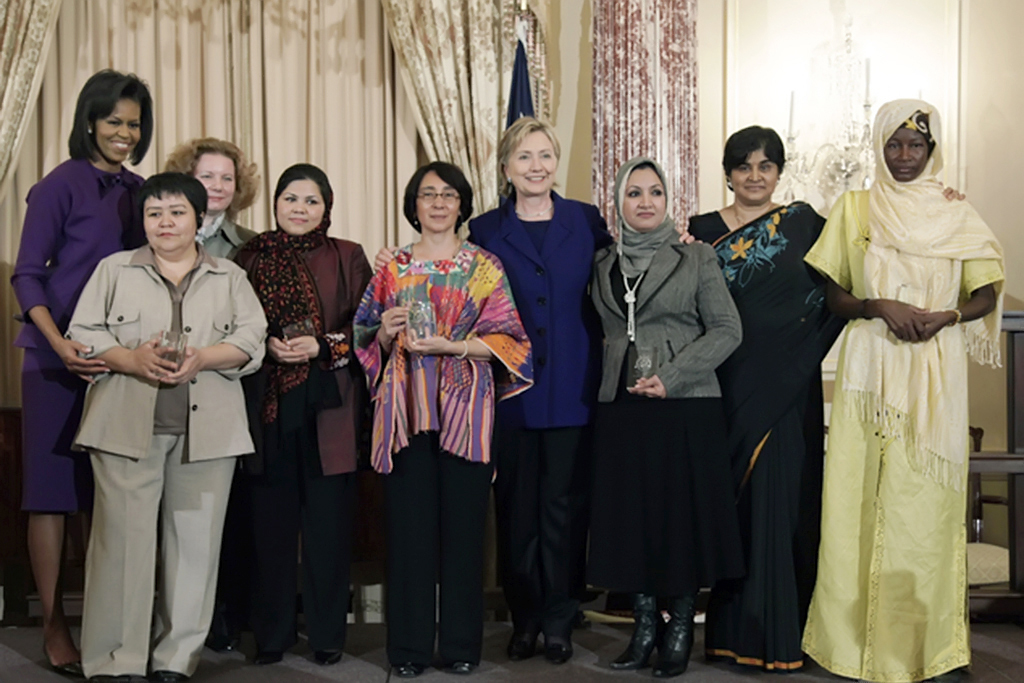 AWIU was once again privileged to honor the women chosen by the United States Department of State as their 2009 International Women of Courage Awardees. These women, selected for their extraordi­nary humanitarian efforts in their countries from over 90 nominations from US Embas­sies worldwide, are courageous and unbelievably brave. They work very hard, often at great personal risk, to help the women of their countries to have freedom of speech, freedom from slavery and abuse and to protect their children. The same rights that we, in the United States enjoy as a matter of course and take for granted: freedom of course and take for granted: freedom, the right to be heard, safety in our everyday endeavors and, perhaps most of all, the right to make choices that affect our lives and our families. In listening to these wom­en we become more aware that these rights are in fact privileges not to be taken lightly. Only seven of the eight women were able to attend. Reem Al Numery (Yemen), was unable to come because of personal safety issues. You will find these women’s stories on the following pages. Each honoree was given a monetary award from AWIU.

The evening also included, as AWIU guests, the following outstanding women: Panel Presenters, Award Recipients and Remarks for the Times. The Panel Presenters included: Shamim Jawad, wife of Afghanistan Am­bassador to the United States. A member of the U.S.-Afghan Women’s Council and Co-Chair of the Afghan Children’s Initia­tive, Mrs. Jawad is actively involved in is­sues relevant to Afghanistan, with a special emphasis on the rights of women and children.

Charlotte (Charlie) Pontecelli, former Dep­uty Under Secretary for International Af­fair, U.S. Department of Labor. In this ca­pacity she provided policy and negotiating expertise and leadership in all major areas of the Department’s international respon­sibilities. Previously she was Senior Coor­dinator for International Women’s Issue’s with the U.S. Department of State. Colleen Graffy, LLM. Law Professor and Director of Global Programs, Pepperdine University School of Law. Formerly, she was the Deputy Assistant Secretary for Public Diplomacy for Europe and Eurasia and prior to that, the Academic Director and Associate Professor of Law for the London Law Program, Pepperdine Uni­versity School of Law.

Clare Crawford Mason, former NBC senior producer and a founding editor of People Magazine. Clare was White House report­er during the Kennedy and early Reagan years. The author of 2 best selling books, Clare is the winner of the Peabody Award, several Emmys, and has been nominated for a Pulitzer prize.

At the Women of Courage Banquet on March 10th, each awardee was presented a certificate of appreciation, a red rose in honor of the beauty and grace they repre­sent and $1000 grant to further their work in their country. A special guest was Cyn­thia Bendlin, a 2008 International Wom­en of Courage winner from Paraguay.

Dr. Mary Pat Seurkamp, President , Col­lege of Notre Dame of Maryland closed the beautiful evening of celebration with the following excerpts (only a part of her address): A quote from Eleanor Roosevelt “You gain strength, courage and confi­dence by every experience in which you really stop to look fear in the face… You must do the thing you think you cannot do.”, Other thoughts from Dr. Seurkamp: “To those honored tonight, thank you so much for all that you have clone for our world and for sharing this evening with all of us. It has been a true honor to meet you and to be here with you.” “This evening’s honorees demonstrate triumph over adver­sity and a steadfast determination to create real change in the world. They were able to do those things which others, and maybe even they themselves, thought at one time were not possible.”

As I close with a prayer of gratitude, I am reminded of some other courageous women, the School Sisters of Notre Dame. Caroline Gerhardinger, now Blessed Theresa, traveled to the United States with five other sisters from Germany in the mid 1800’s – not knowing a word of English. They came to teach immi­grant children, primarily girls and young women. In founding schools in America, including College of Notre Dame. Their stories remind us to dream of what could be. They remind us not only to fight what is wrong, but also to build up what is truly good. May we always remember that in­dividual acts of courage, carried out by people of strength and integrity, will indeed, transform the world.”

Awarded to an AWIU member for outstanding service and leadership towards international understanding.

AWIU honored one of our own, Joanne Kumamoto, AWIU Past President, with the Bernice Behrens Founder’s Award. Joanne has chaired both the Los Angeles Regional Group and Scholarship Committee as well as participating in AWIU delegations. A long time volunteer herself, she has con­ducted workshops on volunteerism, fundraising and grantsmanship to NGOs in Northern Ghana and Turkey. In addi­tion to serving on the Pusan Sister Cities, International Association of Volunteer Ef­fort and the International Visitors Council of Los Angeles, Joanne currently serves on the Los Angeles Little Tokyo Community­ Redevelopment Agency Advisory Committee. Ms. Kumamoto is Principal Partner in Kumamoto Associates, a global marketing, management and communications firm.

AWIU’s 2009 Internationalism Award was presented to Doris Buffett for her outstand­ing work in local, national and internation­al programs. The Founder and President of The Sunshine Lady Foundation, Ms. Buffett is passionate about her responsibili­ties as a philanthropist. The mission of her private foundation reflects the Midwestern values and no-nonsense approach that she grew up with in Omaha, Nebraska. She funds local, national and international programs through matching grants and her “hands-on”, folksy, person-to-person involvement. Since its inception in 1996, her foundation has awarded more than $50 million in grants including a matching grant for the AWIU supported midwifery training program in Afghanistan. A joy to meet and a pleasure to listen to, Ms. Buffett personifies the spirit that embod­ies AWIU and that has always been the focus of the organization since inception.

Public Forum
“Women of Courage… Women of Vision” Hosted by The Office of Interna­tional Women’s Issues, featuring Alina Romanowski, Deputy Assistant Secretary of State for Professional and Cultural Exchanges, and the Secretary of State’s 2009 International Women of Courage. On March 9, AWIU members met at the U.S. Department of State for a question and an­swer discussion with the Women of Courage Awardees. After a brief introduction of each awardee, the forum opened was opened for questions and answers. It was very enlighten­ing and helpful to better understand the dif­ficulties each one encountered in their daily lives. These amazing women put their very lives on the line as they work to change laws, to work for women’s and children rights and bring to the forefront, the problem faced by women in their respective countries.

The panel addressed the topic: Wom­en’s Partnership for a Better World. Discussion, led by Moderator Clare Crawford Mason, was lively and in­cluded many views drawn from the ex­perience of the individual panelists. They encouraged the audience to be even more connected with women from around the world. The internet today presents op­portunities for connections never dreamed of even a few years ago.