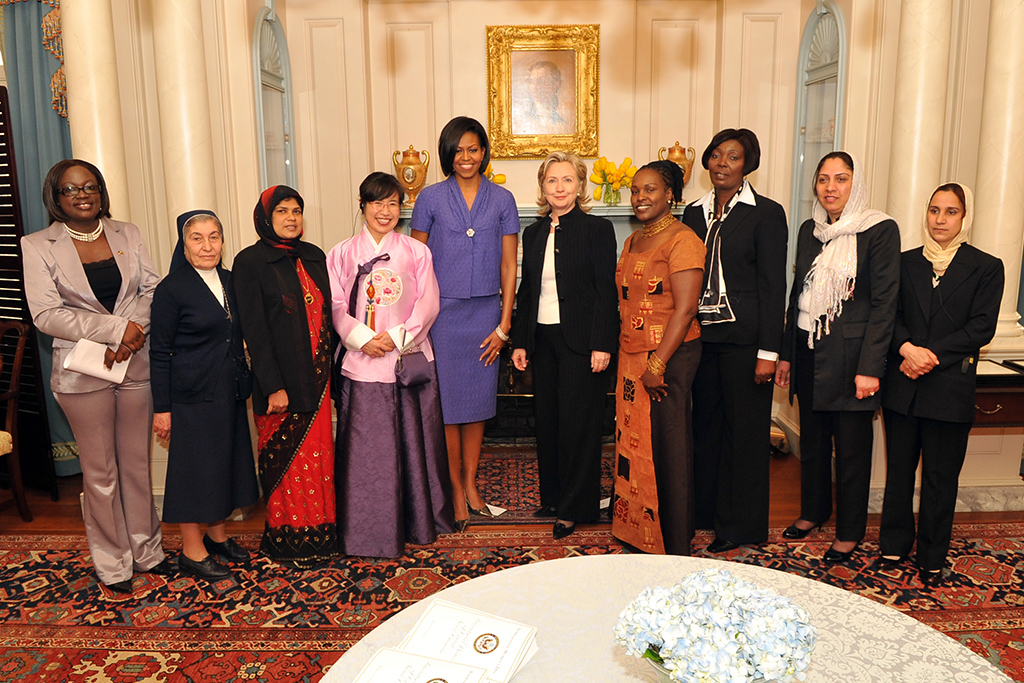 On March 9th, AWIU was again privileged to host an event at the National Press Club honoring the 10 women chosen by the U. S. Department of State from the more then 90 names submitted by U. S. Embas­sies worldwide. These women come from all walks of life, from 9 different countries and yet share the same deep felt commit­ment to promote the rights and freedoms of women and children. Their lives are of­ten at risk. Some have been imprisoned, physically and sexually assaulted. None have been welcomed with open arms in their country for the work for the work they pursue. However the commitment to help women to improve their lives in the work­place and to gain freedom of education and freedom against human trafficking and violence, particularly domestic violence, remains strong. These women are brave, compassionate, smart, and role models for women worldwide.

In the United States, many take for granted the right to be heard, to freedom, to safety­ and to be able to make choices that affect children and our lives. In listening to these of the fine line between rights and privileges. Androula Henriques (Cyprus) and Ahadi Sadr (Iran) were unable to attend. A brief summary of all of ten stories follows.

Ann Njogu (Kenya), representing the International Women of Courage Honorees, gave a moving speech on the importance of the work being clone and to thank AWIU for the monetary award given to each of them. Vocalist Marva Hicks sang a beautiful rendition of “What You Take Away” composed by Tim Acito for AWIU.

Keynote speaker for AWIU’s 2010 Inter­national Women of Courage Celebration dinner held at the National Press Club in Washington, D.C., was Ambassador-at-Large for Global Women’s Issues Melanne Verveer. Appointed by President Barack Obama to the newly-created position with­in the U.S. State Dept., she will coordinate foreign policy issues and activities relating to the political, economic and social ad­vancement of women around the world. In her address, the Ambassador emphasized the need to mobilize concrete support for women’s rights and political and economic empowerment through initiatives and pro­grams designed to increase womens and girls access to education and health care, to combat violence against women and girls in all its forms, and to ensure that women’s rights are fully integrated with human rights in the development of U.S. foreign policy. She asked the question, “What would the future hold if women’s potential were tapped?” She went on to say that she be­lieved the world is in the eve of a new mil­lennium; a time to break the silence and a time to say that it is no longer acceptable to say women’s rights are separate from hu­man rights. And then she added, “Women have the right to education, to health care, to freedom from violence and to the op­portunity to enjoy equal rights. It is time to access our progress to develop new strate­gies and address persistent obstacles to the advancement of women and girls in the world. We are gathered here to support women’s rights; no country can get ahead if half of its citizens are left behind.”

Former First Lady Laura W. Bush, AWIU’s 2010 recipient of the lnternalionalism Award was represented by Anita McBride, Chair, J. William Fulbright Foreign Schol­arship Board and Senior Adviso1; George W. Bush Foundation. Mrs. Bush accepted via video. Throughout her life, Mrs. Bush has been actively involved in issues of edu­cation, health care and human rights, first in her community and then on national and global levels. She is an enthusiastic propo­nent of teacher recruitment programs, an advocate for women’s health and has been an active participant in a campaign to raise awareness of breast cancer and heart dis­ease, both in the U.S. and around the world. Mrs. Bush personifies the spirit that has been the focus of AWIU since its inception.

Composer/lyricist Tim Acito was presented with AWIU’s Outstanding Artistic Leadership Award 2010. In the recent opening of “The Women of Brewster Place, The Musical” for which Tim Acito adapted the book and wrote music and lyrics, the theater’s playbill noted: “Tim’s recent projects include composing the score to a new musical in Seoul, which went on to win Korea’s Best Musical in 2009, composing the theme song ‘What You Take Away’ for AWIU, a human rights group devoted to advancing the status of women throughout the world.” Charlotte (Charlie) Ponticelli was presented with AWIU’s Special Award for Dedicated Service lo AWIU.

Awarded to an AWIU member for outstanding service and leadership towards International understanding.
Judith Hill, recipient of the Behrens Found­er’s Award, has been a driving force for AWIU for over fifteen years. A native of Santa Barbara, CA, Judy’s activities have not been confined to the territory within her state. Judy has represented American Women for International Understand­ing to countries around the globe-from China to Poland, Iceland to Saudi  Arabia… and she isn’t finished yet! She served as president of AWIU from 2002- 2006, chaired the Internationalism Dinner that honored White House correspondent Helen Thomas in 2003 and has either co­chaired or served on the committee of the Women of Courage event in 2008, 2009 and 2010. In fact, Judy is AWIU’s official State Department liaison.

Ms. Hill has been a role model in establish­ing leadership roles for women for decades. She was one of the original bank officers at the founding of Santa Barbara National Bank and its Assistant Vice President. She was Charter Chair for Santa Barbara and Ventura Counties for the National Asso­ciation of Bank Women and a Western Re­gional VP Judy has also served as President for the American Heart Association (Santa Barbara Chapter), The University Club of Santa Barbara, RITA: Research Issues and Take Action Republican Women’s Club and Zonia International among others. To­day, Judy serves as Chair of Santa Barbara’s Women’s Health Coalition, a Director on the Santa Barbara Committee of Foreign Relations in affiliation with the American Committees on Foreign Relations in Washington D.C., and Chief Executive Officer of the Channel City Club, a speakers fo­rum which profiles national and interna­tional experts on diverse topics and issues of our times.

AWIU founder, Bernice Behrens was most certainly smiling as this organization pre­sented the Bernice Behrens Founder’s Award to a woman who has followed so closely Bernice’s own path-and who has built bridges of understanding in many ways for many years. Comments by Judith Hill upon receiv­ing the award. “Thank you Carole, and AWIU. I’m proud to accept this Award, especially since I knew Bernice who was a true fiend, advisor and inspiration to me!

This Award was initiated in 2003 here at the National Press Club, during our Inter­nationalism Dinner. Bernice was thrilled to present the first Award in her name to Marianne Alireza in recognition of her ser­vice to AWIU. Ambassador Walter Cutler gave a wonderful, personal introduction of Marianne, as he knew the Alireza Fam­ily well while posted to Saudi Arabia. His wife, Didi Cutler participated in our 40th Anniversary Celebration just two years ago and both are with us tonight. Bernice’s legacy continues through this Award, and through the Bernice Behrens Scholarship Fund in AWIU, from which Grants were recently made to two women cardiologists from China who came to USA On a medical exchange in collaboration with the sister to sister Heart Health Foundation founded by our member Irene Pollin, a long time friend of Bernice Behrens – they both participated in early AWIU delegations to China and hosted Visiting Chinese Delega­tions here.

Thank you to AWIU friends who nominated me for this very special Award.”

“Women of Courage… Women of Action”

Hosted and moderated by Ambassa­dor-at-Large Office of Global Wom­en’s Issues Melanne Verveer, the fo­rum was split into a morning session and an afternoon session. In each session, four of the awardees featured gave a brief introduction of what they are doing, followed by a question and answer session. Listening to these women and hearing the extraordinary risks they take to promote safety, human rights, freedom and women’s rights, is indeed humbling. They tackie such is­sues as violence against women, human trafficking and exploitation. They fight corruption and demand gov­ernment transparency. Each of these women has dedicated her life to stand­ing up for justice and human dignity. At the AWIU International Women of Courage event on March 9th, each woman was given a red rose in honor of beauty and grace, a certificate of appreciation, and a $1,000 grant to further her work.

On Monday night, we were treated to a visit to the Singapore Embassy. Ambassa­dor Change Heng Chee welcomed us and spoke of the government in Singapore and the roles that women have. Many thanks to Washington, D.C. member Irene Pollin for arranging this lovely event.