IWOC Honorees at the 2012 IWOC Celebration 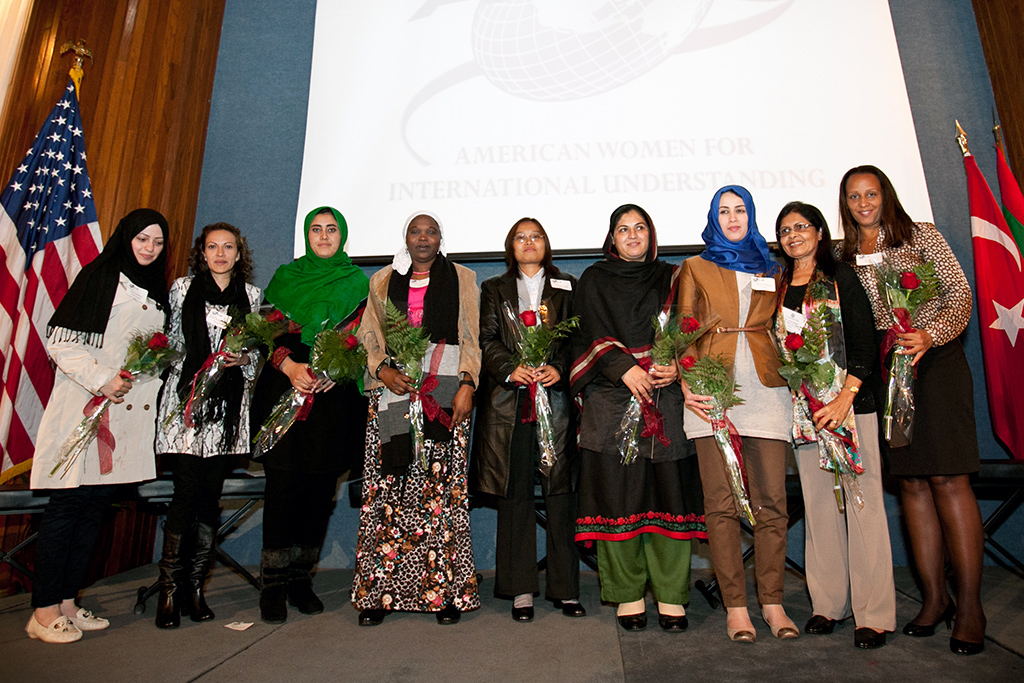 IWOC Honorees at the 2012 IWOC Celebration

American Women for International Understanding (AWIU) hosted the 5th Annual International Women of Courage Celebration in partnership with the U. S. Department of State on March 6, 2012 at the National Press Club in Washington, DC.

As in years past, AWIU members and guests traveled to Washington from across the United States from Los Angeles, San Francisco, Chicago, Seattle, Nashville, and many places in between, for the opportunity to welcome the Women of Courage to America. Mistress of Ceremonies, Leslie M. Schweitzer, introduced this year’s Salute Groups; non-profit organizations chosen by AWIU for work in international affairs. Honored for 2012 were Sister to Sister: The Women’s Heart Health Foundation and Friends of the American University of Afghanistan.

AWIU’s Women of Courage Committee Co-Chair Diane McGlinchey extended a welcome to all and a special thank you to the 2012 Lead Corporate Sponsor, Deloitte. Also acknowledged were corporate sponsors Raco Industrial; Sterling International; Dowitcher Designs; Sodexo; Hickey Brothers Land Company, Inc. and PlanetPix. Special recognition was given to the Davidoff, Malito and Hutcher, LLP, a law and government relations firm, for being the first corporate sponsor to support the AWIU Women of Courage Celebration in the 2008 inaugural year.

AWIU President Jane Mursener Wetzel took the podium to present the 2012 Internationalism Award to Congresswoman Donna F. Edwards (D-Maryland) and Congresswoman Cathy McMorris Rodgers (R-Washington) for bipartisan work as chairwomen of U.S. Congress’ Women’s Task Force on Afghanistan. The importance of women in the global arena was underscored by the acceptance speeches of the recipients.

Ms. Schweitzer returned to the podium to invite the Women of Courage to the stage and to introduce the Honorable Melanne Verveer, Ambassador-at-Large for Global Women’s Issues for the United States. In the highlight of the evening, Ambassador Verveer introduced each of the 2012 Women of Courage and gave a brief description of the work for which they were being honored.

To honor the Women of Courage and their substantial contributions to the rights of women, the Women of MUSE/IQUE, lead by renowned Maestra Rachael Worby, performed a stirring program of American music. AWIU’s Women of Courage signature song, “What You Take Away,” was performed by award winning composer, Tim Acito, and Broadway vocalist, Laurie Wells.

The Bernice Behrens Founder’s Award is presented to an AWIU member who makes an extraordinary contribution in the arena of women’s issues and AWIU’s mission. The 2012 recipient was Mary Ripley, who is 97 years young, and a friend of AWIU founder Bernice Behrens. Mary traveled from her home in Portola Valley, California with her son, William, daughter-in-law Erin and granddaughter Jessica. Mary talked about her work with AWIU and passed the torch on to her granddaughter, who is among the group of dynamic young women joining AWIU.

Reverend Kenneth Lee Barker serves as President of the Meadville Lombard Theological School in Chicago. Reverend Barker gave closing remarks that reflected the timeless mission of AWIU. The finale of this most extraordinary evening was a performance of “America the Beautiful” by Tim Acito and Laurie Wells, who were joined in song by the audience.

On March 8, International Women’s Day, AWIU members were honored to attend the U.S. Secretary of State’s International Women of Courage Awards and reception at the Department of State. Secretary of State, Hillary Rodham Clinton, opened the ceremony, after which the audience was addressed by First Lady Michelle Obama, Ambassador Melanne Verveer and 2011 Nobel Peace Prize winners, Leyman Gbowee of Liberia and Tawakkol Karman of Yemen.

On March 5th, American Women for International Understanding members and guests were welcomed to an afternoon reception at the Royal Danish Embassy hosted by Danish Ambassador Peter Taksoe-Jensen. Ambassador Taksoe- Jensen is a rock music fan and AWIU President Jane Wetzel presented him with a gift of a vintage vinyl Beach Boys album. The California legacy of the Beach Boys and American Women for International Understanding, founded in San Francisco, was well represented.

We salute our sponsors