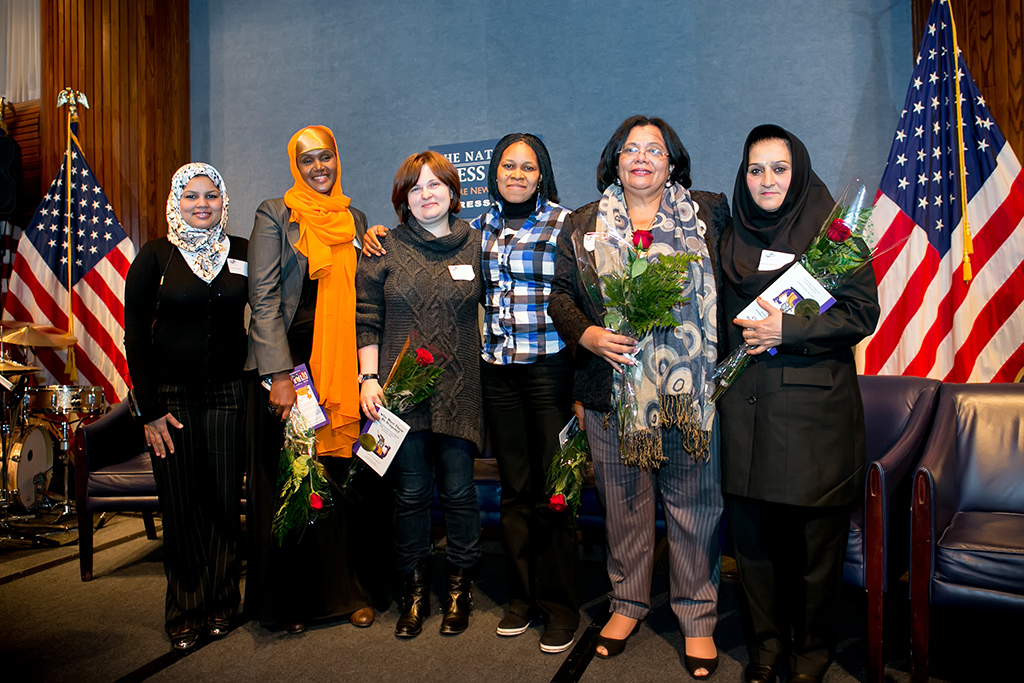 American Women for International Understanding (AWIU) hosted the 6th Annual International Women of Courage Celebration (IWOC) in partnership with the U.S. Department of State on Wednesday, March 6th, 2013 at the National Press Club in Washington, D.C.

The U.S. Department of State established the International Women of Courage Award (IWOC) in 2007 to honor women who are making a substantial difference in the lives of families in countries around the globe. Since 2008, AWIU has partnered with the State Department to support this outstanding program. It is AWIU’s privilege to host an annual celebration that acknowledges these International Women of Courage, their personal stories and their work. Each of the awardees receives a monetary grant from AWIU to support continued efforts in her home country. 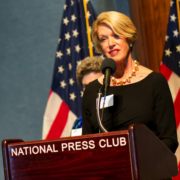 AWIU members traveled from across the US to attend the 6th Annual IWOC Celebration and welcome the International Women of Courage awardees to America. The evening began with IWOC Co-Chair Kathy LeRoy welcoming honorees and guests and asking everyone to join in toasting AWIU’s 45th anniversary. A musical tribute to the IWOC honorees was performed by The Dan Dufford Trio and included AWIU’s signature song “What You Take Away.” 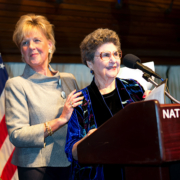 Serving as Mistress of Ceremonies was Leslie M. Schweitzer, Chairman and President of the Friends of American University of Afghanistan Foundation and an AWIU member. Ms. Schweitzer introduced this year’s Salute Group, a non-profit organization chosen for its work in international affairs. Thunderbird for Good, of Thunderbird School of Global Management, was honored for 2013. A special thank you was extended to lead Corporate Sponsor, Deloitte Consulting LLP, for its continued support of AWIU and the International Women of Courage Celebration. Also recognized were Raco Industrial Corporation, Sterling International Group, Sodexo, Davidoff Hutcher & Citron, PlanetPix, Dowitcher Designs and first time sponsor, Dell Computers.

AWIU President Kathleen Hunt introduced businesswoman Marie Therese Royce as the recipient of the AWIU Internationalism Award for her contributions to international business policy. Ms. Royce is Senior Director of International Affairs for the Global and Public Affairs team of Alcatel-Lucent and is also a member of the Department of State’s Advisory Committee on International Communications and Informational Policy.

The Bernice Behrens Founder’s Award, given to an AWIU member who makes an extraordinary contribution to the organization, was presented to Anne Tonks, a member since 2004. As Past President, Anne worked tirelessly to strategically position AWIU as a non-profit for the 21st century.

The evening drew to a close with “Remarks for Our Times” which reflected on the timeless mission of AWIU and the bold efforts of the International Women of Courage. The Celebration concluded with attendees standing and singing “America The Beautiful” together.

Guest reviews of the event were enthusiastic and heartfelt. One attendee emailed her colleagues that the Celebration was “amazing” and that she was proud to support the event. She noted, “The recipients of this award persevere in the belief that they are making things better for the next woman. The journey is not over for any of these women and change occurs little by little, but they are making a real and critical difference in the lives of people today. The takeaway from this for me is that we can all do something – even small actions can make a difference.”

In addition to the Celebration, members of American Women for International Understanding were given the opportunity to attend several notable events. On March 5th, Mark G. Dimunation, Chief of Rare Book and Special Collections at the Library of Congress, gave AWIU members and guests a fascinating insider tour of Jefferson’s private library. Attendees then met with Congressman Edward R. Royce, Chairman of the Foreign Affairs Committee, for an intimate Q&A session at the Capitol. On March 7th, Her Excellency Ritva Koukku-Ronde, Ambassador of Finland to the United States, hosted a reception for AWIU at the Embassy of Finland, during which the Ambassador and AWIU Internationalism Award Recipient, Marie Royce, engaged in a discussion on today’s international women.

A special thank you to lead Corporate Sponsor, Deloitte Consulting LLP, for its continued support of AWIU and the International Women of Courage Celebration.