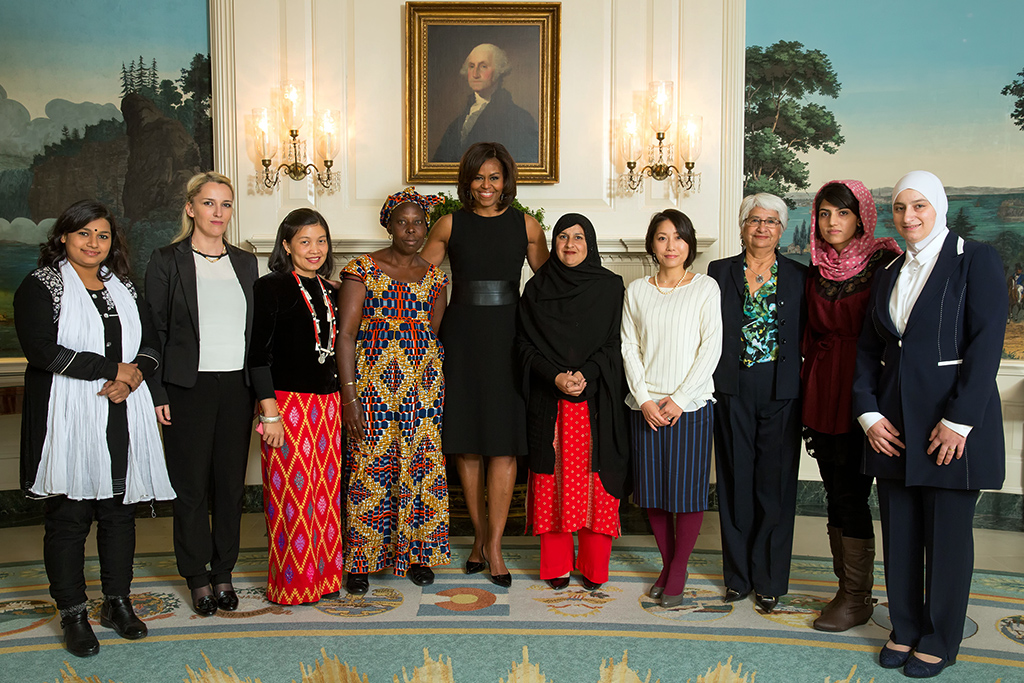 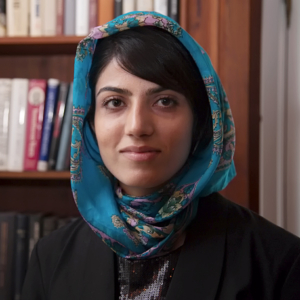 Captain Niloofar Rahmani is the first female fixed-wing Afghan Air Force pilot in the history of Afghanistan. Captain Rahmani was only 18 years old when she heard an announcement in the media about the recruitment of young women into the Afghan Air Force, including the opportunity for pilot training. Soon after, she enlisted in officer training and graduated as a Second Lieutenant. In July 2012 – just two years after hearing the recruitment announcement – Captain Rahmani graduated from flight school and completed her first solo flight in September in a Cessna 182, an American four-seat, single-engine light airplane. She continued to expand her skills and challenge all odds when she graduated from advanced flight training and became qualified to fly a C-208 military cargo aircraft. Unfortunately, after her story was publicized, Captain Rahmani and her family began to receive threats from the Taliban and from members of her extended family, who disapproved of her career and ambition. As a result, her family has had to take tremendous caution and relocate several times in Afghanistan. In spite of these threats, Captain Rahmani remains determined to continue her career in the Afghan Air Force and work as frequently as her security situation permits. She is also deeply committed to encouraging other young women to join the cadre of female AAF pilots. 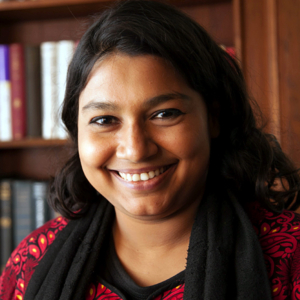 Nadia Sharmeen is a dedicated journalist and staunch women’s rights advocate. Having set her sights on becoming a journalist in middle school, Ms. Sharmeen joined the Bangladesh press corps in 2009, working as a crime reporter. In April 2013, while assigned to cover a massive rally organized by a coalition of fundamentalist organizations whose platform included a call for revoking Bangladesh’s women’s development policy, Ms. Sharmeen fearlessly went to work despite the strong possibility of facing a hostile crowd. As verbal harassment escalated and the crowd grew aggressive, a group of 50 to 60 men repeatedly beat, kicked, and threw her to the ground – causing her serious injury. Ms. Sharmeen’s employer denied sending her on assignment, refused to cover her medical expenses, and eventually forced her to resign. Although local police filed a case against 60 unnamed rally attendees, now – nearly two years later – none of her assailants have been identified or arrested. Today, Ms. Sharmeen works for another TV station and has enthusiastically resumed work as a crime reporter, challenging the social forces that oppose any changes to prevailing gender norms. 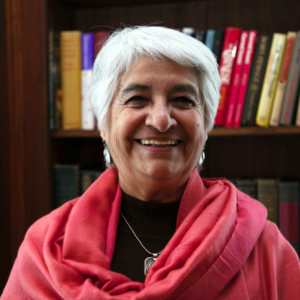 Jailed during the dictatorship era and a fierce defender of independent civil society, Rosa Julieta Montano Salvatierra has never shied from advocating for the rights of Bolivian women. Through her NGO Oficina Jurídica para la Mujer, Ms. Montano has provided legal assistance to women in some of the most emblematic cases of rape, sexual assault, and domestic abuse in Bolivia. In total, her organization has provided services to more than 30,000 women in Bolivia and has influenced nearly every piece of legislation that advanced women’s rights over the past 30 years. Ms. Montano’s advocacy has resulted in stricter penalties for rape and sexual assault, greater protections for reproductive rights, and advances in gender parity laws that helped make Bolivia’s 2015-2020 Legislative Assembly one of the most gender equal in the world. 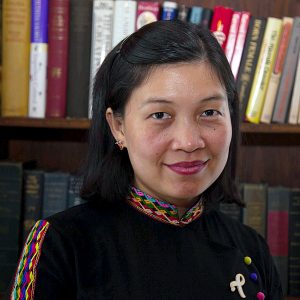 As director of the Gender Equality Network, a coalition of more than 90 organizations collaborating to advocate for women’s rights, May Sabe Phyu is leading efforts to end discrimination against women and ethnic and religious minorities in Burma. May Sabe Phyu co-founded the Kachin Peace Network and Kachin Women Peace Network to prioritize the needs of ethnic minority women in Kachin State, who are disproportionately affected by the longstanding civil conflict between the government and ethnic armed groups in northern Burma. Her efforts to address gender-based violence and promote women’s involvement in the peace process have led to numerous legal charges, as well as harassment and threats from anonymous networks. Yet, May Sabe Phyu’s determination in the face of adversity, political opposition, widely held rigid views about women’s roles, and personal risk has inspired collective action to push for government policy changes and realize women’s rights in Burma. 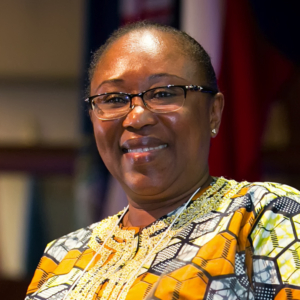 Beatrice Epaye’s beloved Central African Republic is a nation in distress, with half of the population food insecure, and more than one-fifth of the population displaced. When the Seleka rebels ruled the streets of Bangui, they invaded the outspoken political figure’s house on several occasions. Undeterred by perpetual threats, together with religious leaders and civil society, this National Transitional Council member, Chairperson of the Council’s Foreign Affairs Committee, and former government minister has organized conferences, participated in radio interviews, and conducted meetings with local and international organizations to describe and condemn the horrors and crimes perpetrated by armed groups. As the current president of the Preparatory Committee for the National Dialogue, she has played a pivotal role in persuading disparate stakeholders, including armed groups, to play a constructive role in reconciliation talks. Her charity association, “Fondation Voix du Coeur,” serves as a safe haven for street children who seek protection against security force abuses, and a shelter and counseling center for abandoned children, many of whom have run away from abusive relationships, sexual slavery, and forced marriages. She tirelessly advocates for better governance, economic development, and civil society freedoms, defends respect for human rights, and promotes national reconciliation. 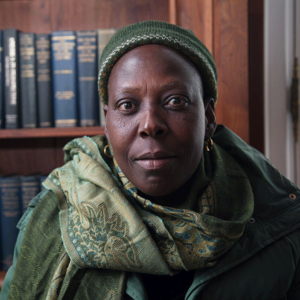 The first woman to be educated in her family, Marie Claire Tchecola grew up in a small Guinean village near the border with Senegal. Ms. Tchecola could have been a doctor, but she chose nursing —in her own words—”because you can touch more people.” Only doctors at Guinea’s largest hospital were supplied gloves, so it was precisely Ms. Tchecola’s passion for touching, nurturing, and caring that exposed her to the Ebola Virus Disease while treating a patient at Conakry’s Donka Hospital in July 2014. At the time, transmission was not widespread in the capital, and one of the insidious traits of Ebola is that its early symptoms mimic that of other diseases common in Guinea. Once Ms. Tchecola identified her own symptoms, however, she quickly checked herself into a treatment center, stopping the chain of transmission, and saving her co-workers, friends, and family from infection. Battling fear and stigma over Ebola, including being forced by her landlord to leave her own home, Ms. Tchecola returned to her work caring for the sick as an emergency room nurse at Donka Hospital. She is an active member of the Ebola Survivors Association of Guinea, committed to speaking out publicly about Ebola to spread awareness about the disease and to fight stigmatization against survivors. 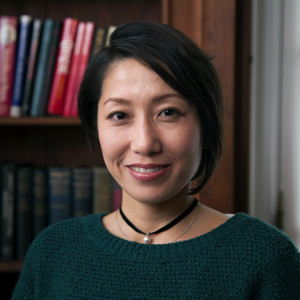 Sayaka Osakabe has ignited a national debate over how to reform the Japanese workplace to accommodate women and families. Like many Japanese women, she was harassed and pressured to resign from her job after becoming pregnant. After suffering two stress-related miscarriages, she pursued legal recourse for “maternity harassment—Matahara” in her own case, and founded “Matahara Net” to help other women. One of those women won the landmark Japan Supreme Court Supreme Court case in October 2014 ruling against pregnancy discrimination. Ms. Osakabe’s courage to speak out has spurred government and civil society action, including the Government of Japan official notice on January 23, 2015 that dismissals and demotions of pregnant women are presumed illegal. Ms. Osakabe made “matahara” a 2014 buzzword in Japan, supporting women’s full participation in the workplace to grow Japan’s economy. 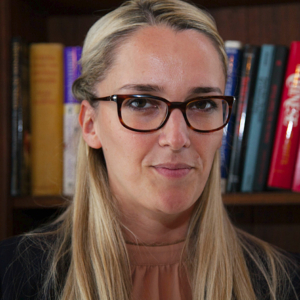 Arbana Xharra’s reporting contributes to the strengthening of Kosovo’s nascent democracy. Her early reporting on religious extremism and its impact on society shed light on a serious problem for Kosovo and the region. Ms. Xharra authored a series of investigative reports on extremists operating in Kosovo and uncovered financial and operational links with foreign terrorist organizations among local imams and NGOs. These efforts not only helped society understand the problem, but also bolstered government efforts to address the problem. Reactions to her reporting resulted in public attacks on her reputation and death threats to her and her family. Undeterred, Ms. Xharra continues to report on malfeasance in public institutions, including cases involving high-ranking officials. As editor-in-chief of one of Kosovo’s top daily newspapers, Ms. Xharra is galvanizing a new generation of journalists in search of, and dedicated to uncovering, the truth. 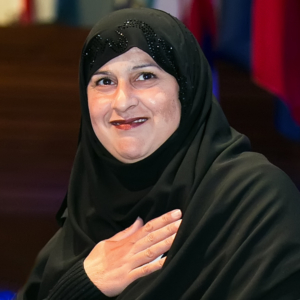 Hailing from the formerly Taliban-controlled Swat Valley, Tabassum Adnan is a women’s rights advocate. Married at just 13 years-old, Ms. Adnan divorced her husband after 20 years of physical and mental abuse – a move that caused her to lose her children, her home, and money. Abandoned and impoverished, she started her own NGO, Khwendo Jirga, or Sister’s Council. Khwendo Jirga is the first ever women-only Jirga, meeting weekly to address issues of honor killings, acid attacks, and swara, which is the act of handing over women as compensation for crimes or as a resolution of a dispute. Khwendo Jirga is also a staging ground to launch awareness campaigns for local women’s causes, including on issues related to women and their security, and mobilizes women to vote, offers free legal assistance to survivors of violence, and regularly meets with elected representatives to promote women’s interests in the district. Ms. Adnan’s calls to action in a child rape case resulted in her being invited to join the Grand Male Jirga in prosecuting the suspects – the first time in Pashtun history that a woman was an active participant in a Jirga. Ms. Adnan continues her work and advocacy despite numerous threats, as well as recommendations from friends and colleagues to keep a low profile. 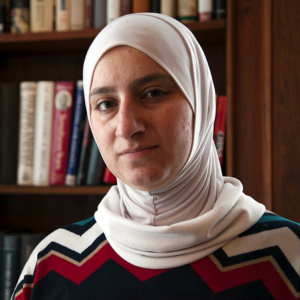 Majd Chourbaji has been a tireless advocate for women’s leadership in politics and peace building and a longtime defender of women and detainee rights. In 2011, when Syrians across the country first began demanding respect for human rights from the Asad regime, Ms. Chourbaji helped lead the call for reform and change from her hometown in Darayya. As the Asad regime’s imprisonment of civil activists skyrocketed, she quickly turned her attention to the rights of prisoners. In December 2012, Ms. Chourbaji herself became a victim when the Asad regime arrested her for organizing sit-ins calling for the release of thousands of political prisoners. Despite abuses she endured, Ms. Chourbaji was not deterred from her work. She organized workshops on peace building and citizenship among her fellow prisoners and persuaded 150 women detainees to stage a strike to demanding due process. These nonviolent activities pressured the Asad regime to allow these women access to the court system in Damascus. Subsequently, 83 women were released, including Ms. Chourbaji. She was forced to leave Syria, however, and relocate to Lebanon after being pursued by the Asad regime’s intelligence services. Today, she continues her work on the rights of prisoners and on making sure other Syrian women’s voices are heard. As the public relations director for the Women Now for Development centers in Lebanon, Ms. Chourbaji has helped Syrian women take on leadership roles in their communities and has prepared them to fully participate in peace building efforts at the local and national level.