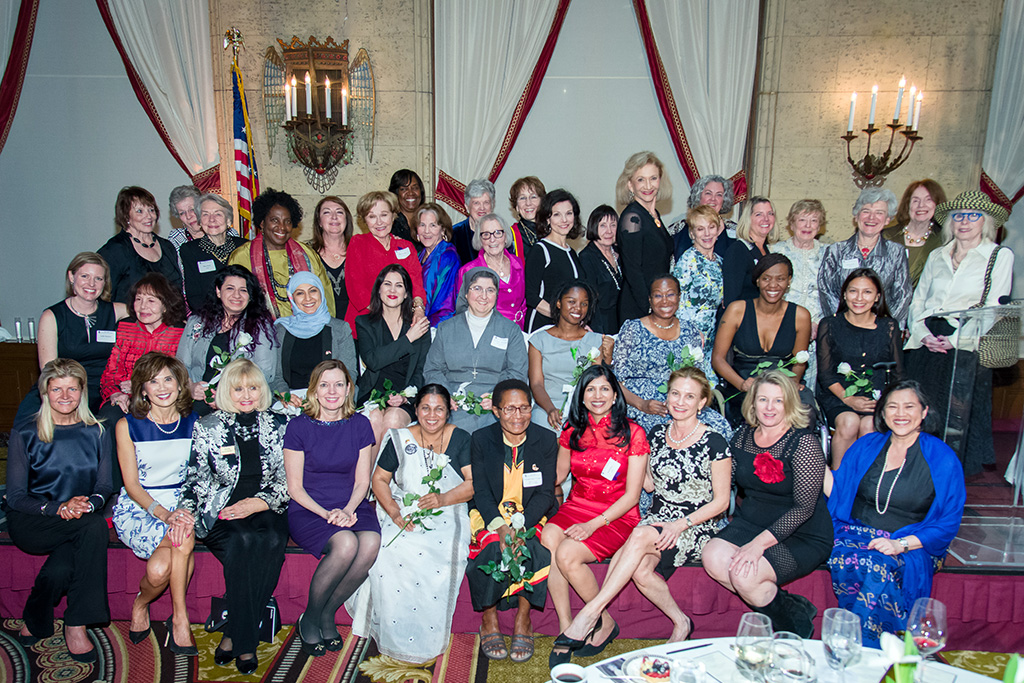 American Women for International Understanding (AWIU) presented The 10th Annual International Women of Courage Celebration on April 6th, 2017 at the Jonathan Club in Los Angeles. The evening honored extraordinary women from around the globe for their courageous and selfless efforts in advocating for peace, justice, human rights and women’s equality, often in the face of great personal risk.

March 2017 was the prestigious 11th Annual Secretary of State’s International Women of Courage (IWOC) Award ceremony. Under the leadership of Secretary Condoleezza Rice, the State Department established the IWOC Award in 2007 to honor women leaders who are making a substantial difference in the lives of women and girls around the world.

AWIU, which has promoted woman-to-woman interaction and global understanding since 1967, first collaborated with the State Department in 2008 to support this outstanding program by hosting an annual celebration dinner for the honorees. Each of the IWOCs also receives a monetary grant from AWIU to support continued efforts in her home country. This year grants from AWIU helped the IWOCs to advance positive change in their home countries of Botswana, Colombia, Democratic Republic of Congo, Iraq, Niger, Papua New Guinea, Peru, Sri Lanka, Syria, Turkey, Vietnam, and Yemen.

Since 2007, the Department of State and AWIU have honored over 100 women from over 60 countries. Secretary of State Rex Tillerson, stated “Women’s empowerment is not just a moral imperative, it is a strategic investment in our collective security. In short, when women do better, countries do better. Women’s security is a matter of international security. Without it, we all lose.”

AWIU’s annual International Women of Courage (IWOC) Celebration was held on April 6th in Los Angeles at the Jonathan Town Club. This year marked the 10th Anniversary of the IWOC Celebration as well as the 50th Anniversary of AWIU’s founding. The event was made possible by the collaborative efforts of the U.S. Department of State’s Office of Global Women’s Issues and Bureau of Education and Cultural Affairs, the International Visitor’s Council of Los Angeles and AWIU’s IWOC Celebration Committee. 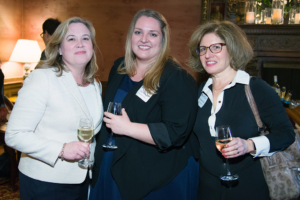 Alison Moylan, Emily Brown and Betty Bernstein-Zabza from the US State Department

The evening began with a reception for over 250 guests, including State Department officials, foreign dignitaries, sponsors and AWIU members. As the guests entered the dining room, they were greeted by a slideshow of prior IWOC Awardees. Cynthy Moffatt, an AWIU member and former Chair of the IWOC Celebration Committee, welcomed the guests as the Mistress of Ceremonies. She introduced Maggie Sabbag, 2017 IWOC Celebration Chair, who thanked all for their vital support. In recognition of AWIU’s 50th Anniversary, the grants for the 2017 International Women of Courage were the largest ever, honoring the organization’s half-century commitment to improving the lives of women across the globe and supporting the mission to build bridges of international understanding. 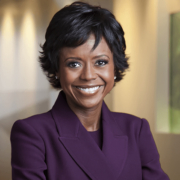 Mellody Hobson, President of Ariel Investments and Honorary Chair of the 2017 Celebration congratulated the IWOCs in an inspirational video: “Your stories of grit, determination, perseverance and courage are reminders to all women that with a measure of bravery, you can change the world.”

During the dinner program, Ms. Betty Bernstein-Zabza, Senior Advisor and Director of Operations in the Secretary’s Office of Global Women’s Issues, introduced the 2017 International Women of Courage Awardees. She prefaced her introductions with, “Each woman’s story is an inspiring reminder of how individuals can make a difference. Taken together, they provide a powerful message of courage and leadership.” 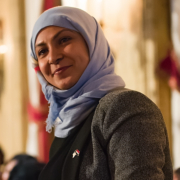 A highlight of the evening was hearing directly from two of the IWOCs: Fadia Thabet of Yemen and Rebecca Kabugho of the Democratic Republic of the Congo. Ms. Thabet, an activist working to reintegrate former child soldiers of Al Qaeda and Houthi militias into society, brought the crowd to their collective feet when she declared, “The women sitting in front of you have all fought. We have chosen to tell our stories of compassion, resilience and bravery. To all the women here, you are part of our journey and fight… We will walk side by side. Holding each other’s hands. We are feminists, we are powerful, and we are intelligent and we are a movement!” 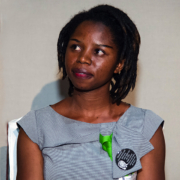 IWOC Rebecca Kabugho of Democratic Republic of the Congo

Ms. Kabugho from the Democratic Republic of the Congo, one of the youngest prisoners of conscience in the world, was recognized for her key role in a series of peaceful protests demanding that the Congolese government hold credible elections. In her remarks, she spoke passionately of the strong bond the 2017 IWOCs shared and how their sisterhood was an invaluable resource, saying “We can change the world. Without us, it will not be done. Hand in hand, we will make the world a better place.” 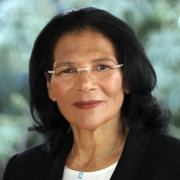 The AWIU Internationalism Award was presented to Ms. Anita DeFrantz, the first American woman and the first African American to be named to the International Olympic Committee. An Olympic medalist herself, Ms. DeFrantz was honored for her lifetime of work to increase opportunities for women around the globe through sports and for her advocacy against human trafficking and slavery. Ms. DeFrantz was unable to attend the event but, by video, she expressed her thanks to AWIU and her admiration for all the International Women of Courage, adding, “You lift me up.” 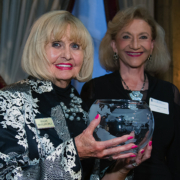 The Bernice Behrens Founders Award was given to Diane McGlinchey, a dedicated member of AWIU for over a decade. Her commitment to the work of AWIU flows from a lifetime spent in service to fellow women and to her country. Ms. McGlinchey addressed the audience stating, “Let us move forward knowing that the collective power of women –well organized, passionate and respectful – is unstoppable.” perfectly capturing the sentiment of the evening. 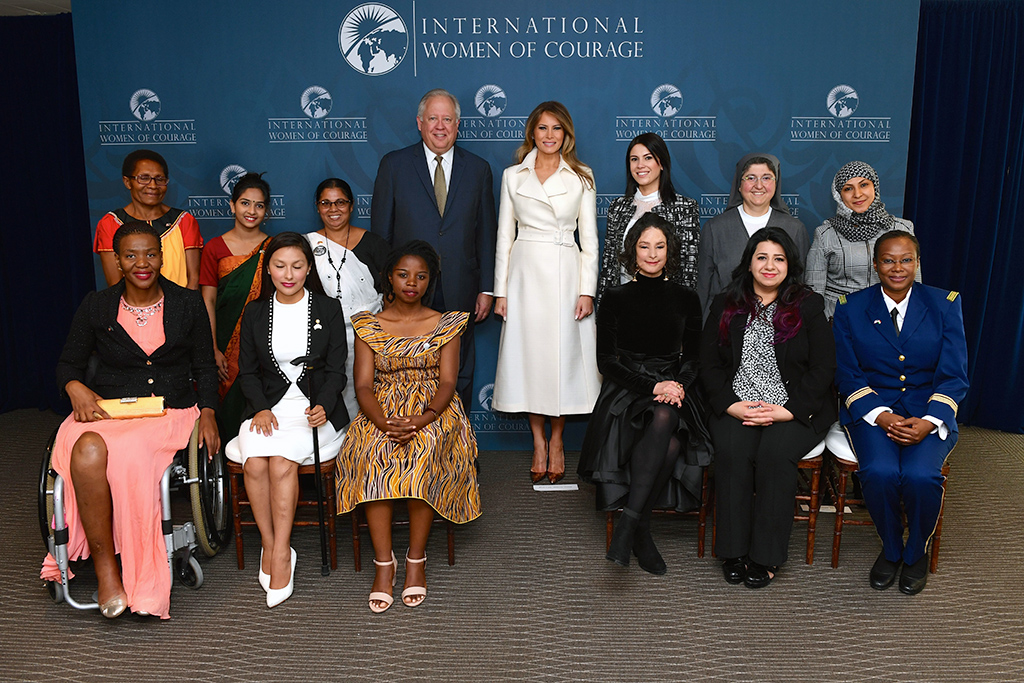 On March 29th, First Lady Melania Trump and Under Secretary of State for Political Affairs Thomas A. Shannon presented the 2017 Secretary of State’s International Women of Courage Award to thirteen extraordinary women during a moving ceremony at the State Department. The First Lady addressed the awardees and stated, “As women, we must continue to stand together with the steadfast goal of making our world safer through acts of collaborative and individual bravery. As we all know, wherever women are diminished, the entire world is diminished with them.” Under Secretary Shannon then introduced each awardee, sharing the remarkable details of her courage and perseverance. 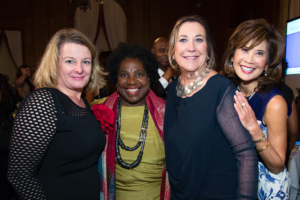 After their visit to Washington DC, many of the IWOCs travelled throughout the United States as part of a cultural and educational exchange. Their arrival in Los Angeles provided an opportunity for them to reconvene and compare their various experiences while in America. Additionally, the International Visitors Council of Los Angeles organized a panel at City Hall where the IWOCs shared their stories and answered questions about the challenges and issues faced by women in their countries.

Following the panel, AWIU’s 2017 IWOC Celebration served as the culminating event for these extraordinary women’s visit. The evening provided the IWOCs a fitting and final opportunity to be honored, appreciated, and celebrated.

2017 marked Deloitte’s ninth year as a sponsor of the Celebration, and its seventh consecutive year as the Celebration’s Global Leadership Sponsor. In addition, AWIU is grateful for the essential support provided by a team of helpful Deloitte volunteers during the Celebration. During the program that evening, Deloitte was recognized for its commitment to inclusivity and diversity and for being a progressive leader in promoting the talents of women in the work environment.

AWIU thanks all its generous sponsors of the 2017 International Women of Courage Celebration: