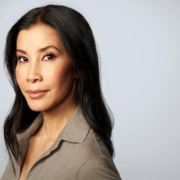 American Women for International Understanding is pleased to announce that our Honorary Chair for the International Women of Courage Celebration 2018 is Lisa Ling, an award-winning journalist, author and advocate for women. Ms. Ling will join a list of other distinguished women on the Honorary Committee offering their support to AWIU’s Celebration in the spring of 2018. The exact date of the International Women of Courage Celebration will be determined by the US Department of State in early February 2018, but our committee is honored to work with Ms. Ling as we plan our event.

Lisa Ling recently wrapped her fourth season the CNN Original Series, “This is Life with Lisa Ling.” In each episode, she immerses herself in communities that are unusual, extraordinary and sometimes dangerous, giving viewers an inside look at some of America’s most unconventional segments of society and some of its most important issues. In 2017, the series won a Gracie Award for Excellence in Media.

Ling is also the host of the new CNN digital series, “This is Sex with Lisa Ling,” where she explores the taboos around sex in America and the ways in which sexuality has been stigmatized, policed and politicized.

Before coming to CNN, Ling was a field correspondent for “The Oprah Winfrey Show” and contributor to ABC News’ “Nightline” and National Geographic’s “Explorer.” She has reported from dozens of countries, covering stories about gang rape in the Congo, bride burning in India and the Lord’s Resistance Army in Uganda, among other issues that are too often ignored.

Ling got her start in journalism as a correspondent for Channel One News where she covered the civil war in Afghanistan at 21 years of age. She later went on to become a co-host of ABC Daytime’s hit show “The View,” which won its first daytime Emmy during her time at the show. Ling has also served as a special correspondent for CNN’s “Planet in Peril” series and is a contributing editor for USA Today’s USA Weekend magazine. In 2011, her acclaimed documentary journalism series, “Our America with Lisa Ling,” began airing on OWN.

Ling is the co-author of “Mother, Daughter, Sister, Bride: Rituals of Womanhood” and “Somewhere Inside: One Sister’s Captivity in North Korea and the Other’s Fight to Bring Her Home,” which she penned with her sister, Laura. In 2014, President Obama named Ling to the Commission on White House Fellows.

Ling resides in Los Angeles with her husband, two daughters and father. The International Women of Courage Celebration Committee thanks Ms. Ling for her support of this AWIU event and her advocacy on behalf of women leaders around the world.