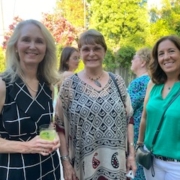 On Saturday evening, July 9th, Carol Ann Warren hosted a small gathering for AWIU’s Los Angeles chapter at her San Marino home. The featured guest was Ukrainian refugee Alona Tychyna, who spoke about her upbringing in a small Ukrainian town, the war that began in February, 2022, her precarious journey to the United States, her refugee status, her recent activities in the States, and her fears for her friends and relatives who remain in Ukraine and Russia.

Alona shared photos of bombed out buildings in her city of Zhytomyr, including a school, homes, and other civilian structures, and talked about rampant death and destruction everywhere. In March, Alona took refuge in Poland, where an offer of tickets to the U.S. came from a friend of her traveling companion. On March 30th, she was granted official permission to legally enter the United States on a humanitarian parole. Today she lives in the La Jolla neighborhood of San Diego as the guest of a generous couple and their two young sons.

The invasion of Ukraine has produced the largest refugee crisis in Europe since the Second World War. The UN says that, as of July 4th, more than 5.2 million refugees from Ukraine have been recorded across Europe and more than 3.5 million have applied for temporary residence in another country. Ninety percent of them are women and children.

Alona said she began her study of English in the past three months, which surprised everyone, as her English was excellent. One of the tragedies of the war, she said, was that “we are estranged from our friends and relatives in Russia, and expect never to see them again.” “Even the Russian language is a problem,” she said, explaining that schisms had developed between Russian and Ukrainian speakers, although many Ukrainians, especially in the cities, speak Russian. 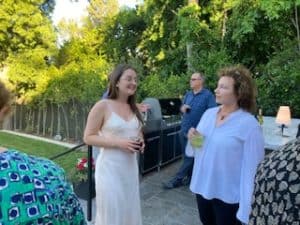