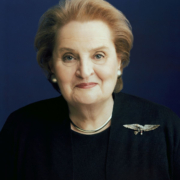 The AWIU community is deeply saddened by the loss of Secretary Madeleine Albright, who died on March 23, 2022 in Washington, D.C.

An American diplomat who served as the 64th United States secretary of state from 1997 to 2001 under President Bill Clinton, she was the first woman appointed to this position.

Albright immigrated with her family to the United States in 1948 from Communist Czechoslovakia and became a U.S. citizen in 1957. Albright graduated from Wellesley College in 1959 and earned a Ph.D. from Columbia University in 1975, writing her thesis on the Prague Spring. She worked as an aide to Senator Edmund Muskie before taking a position under Zbigniew Brzezinski on the National Security Council until 1981, when President Jimmy Carter left office. After leaving the National Security Council, Albright joined the academic faculty of Georgetown University and advised Democratic candidates regarding foreign policy. After Clinton’s victory in the 1992 presidential election, Albright helped assemble his National Security Council. Clinton appointed her to the position of U.S. Ambassador to the United Nations in 1993, a position she held until appointed secretary of state.

Later, Albright served as chair of the Albright Stonebridge Group, a consulting firm, and was the Michael and Virginia Mortara Endowed Distinguished Professor in the Practice of Diplomacy at Georgetown University’s School of Foreign Service. She was awarded the Presidential Medal of Freedom by U.S. president Barack Obama in May 2012.

“Madeleine K. Albright was a pioneer who I admired and served with honor. She broke through the glass ceiling for women in American diplomacy with an unequivocal commitment to democracy and human rights. As a diplomat, I modeled my support for women’s empowerment on Secretary Albright’s advocacy for the crucial role women play in global peace, human development and prosperity. A caring leader, Secretary Albright was outspoken about American women having a seat at the table in U.S. domestic and foreign policy. I am among the many women who mentor because of Secretary Albright’s lasting legacy of women helping each other.”

“It took me quite a long time to develop a voice, and now that I have it, I am not going to be silent.”

“We’ve interviewed a lot of accomplished women on Satellite Sisters. It’s a humbling experience to talk to Nobel laureates or astronauts or great writers. Secretary Madeleine Albright was one such guest. I will never forget the photo of her being sworn in as the first female Secretary of State with her three daughters at her side. That representation of a woman, a refugee, a single mother ascending to the top spot at State changed the lives and paths of a lot of women to come. She was a delightful guest, explaining her Pin Diplomacy or laughing about the time she was at high level meetings with all men and had to request a window be opened because of hot flashes! But she was an even better role model. Her personal story is inspiring. If you haven’t read her memoir, now would be a great time. Thank you, Madam Secretary.”

“I was in seminars with her at Columbia. She was such a modest woman, comfortable among the greats at a young age but never seeking to upstage them. She once said ‘There is a special place in hell for women who don’t help each other!'”

“I only wish I had known or worked with Madeleine Albright. Of the many wonderful things I’ve read about her since her death, I think one of the most pertinent to our present situation is that she was a refugee…a reminder that one of America’s basic strengths has been in its immigrants.”

“She was the superwoman of the political world who had the courage to represent all women and voice our freedom in a time when we were still invisible. She dedicated her life to bridging cultures and the gender gap, achieving numerous feats and breakthroughs that will go down in history.”

“What a role model for women in the world! Madeline Albright’s global influence paved the way to encourage women to stand up for what they believe in.”

“The reason I made women’s issues central to American foreign policy was not because I was a feminist, but because we know that societies are more stable if women are politically and economically empowered.”

“At the recommendation of Julie Pantiskas, I had the pleasure of attending an ‘Evening with Madeleine Albright’- a conversation and book signing event hosted by the Live Talks Los Angeles speaker series on February 6, 2018. Upon the signing of her book, Fascism: A Warning, I stood before a woman with keen global insight, a giant presence, and an admirable disposition. It was absolutely remarkable.”

“I had the pleasure of sharing time with Madeline Albright during a domestic flight. I was struck by her humor, candor, intensity, intelligence and her eagerness to truly listen. Described by Condoleeza Rice as a ‘true American giant,’ her diminutive stature in no way represented the fierce and formidable force she was – a champion for good, forhumanity and for women, advocating that societies are more stable if women are politically and economically empowered. As women leaders, we should be well aware of the responsibility we hold to best honor her legacy through our persistence in uplifting other women through our work. Her own words best summarize my respect and admiration for Ms. Albright: ‘Once you have climbed the ladder of success, you don’t push it away from the building—you are only strengthened if there are more women.’ Her impact will forever ring true, standing clear and strong as a reminder to what we must strive to be and to do as leaders, as women and as people.”

2022 Grants: Deep in the Process
Scroll to top