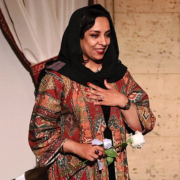 The award recognizes Sadat’s effort to promote democracy, human rights, and peace through the art of motion pictures, noting her body of valuable cinematic works and the semantic and artistic approaches which address important human rights issues.

In response, Sadat said: “I’m getting this important film award at a time in which I’m not allowed to make a film in my country. Art and culture, especially cinema, are completely shut down. This is also a time when people of my country are suffering poverty and hunger, women are excluded from society, artists are in exile and the voice of freedom is silent. And we are moving towards an unknown future, and perhaps the world is silently waiting for a greater catastrophe.

Throughout her career, Sadat has faced enormous risks and has overcome tremendous cultural, bureaucratic, and monetary barriers. Born in Herat in 1981, Sadat always dreamed of being a filmmaker. But when the Taliban came to power, her dreams were nearly crushed as music, movies, television, and theater were banned. At age 20, Sadat directed her first feature, “Three Dots,” written in secret during the Taliban era, about a young widow who is pressured to marry an in-law. Sadat took major risks to shoot the film in a rural village; at one point, she was chased away at gunpoint by villagers angry at her use of uncovered women actresses. The film received international acclaim.

In 2003, Sadat founded Roya Film House to tell compelling stories about Afghanistan. In more than 30 documentaries, films, and television shows, Sadat has not shied away from depicting the brutal injustices of life for Afghan women. In 2013, she founded the Afghanistan International Women’s Film Festival to promote women filmmakers and the empowerment of Afghan women through art. Sadat’s most recent work, “A Letter to the President,” tells the story of a strong-willed woman who is sentenced to death after accidentally killing her abusive husband.

Among other honors, Sadat was recognized as a 2018 International Woman of Courage by the U.S. State Department, a prestigious award given to women in recognition of their courageous and selfless efforts advocating for human rights, women’s equality, and social progress, often in the face of great personal risk. American Women for International Understanding (AWIU) hosts an annual event in Los Angeles to celebrate these women, each of whom receives an AWIU grant to support her ongoing work.

Kim Dae-jung was a South Korean statesman and activist who served as the eighth president of South Korea from 1998 to 2003, and was the first opposition candidate to win this office. He was a 2000 Nobel Peace Prize recipient for his work for democracy and human rights in South Korea and in East Asia in general, and for peace and reconciliation with North Korea and Japan. He was sometimes referred to as “the Nelson Mandela of Asia.”

A Tribute to Steven Marwa
Scroll to top