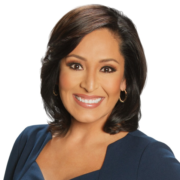 American Women for International Understanding is delighted to announce that six-time Emmy Award-winning news anchor, Lynette Romero, will emcee the 15th Annual International Women of Courage Celebration. A veteran journalist with more than three decades in the industry, Romero brings extensive news experience as anchor of the extremely popular KTLA Weekend Morning News. The 6am-11am morning news block leads the market with the highest average ratings across all other time periods.

Romero came to KTLA in January 1998 as a general assignment reporter and in her first year at the station, received the prestigious Golden Mike Award from the Radio and Television News Association of Southern California for producing and reporting the KTLA News series “Public Schools: Working the System.” From August 2000 to October 2004, Romero was co-anchor for “KTLA Prime News,” where she, along with her news colleagues, received a second Golden Mike for best 60-minute evening newscast. She is a recipient of six local Emmy Awards including an Emmy for best feature news reporting. In 2006, Romero received a local Emmy and Golden Mike Award for her work as anchor/reporter for the show “Access L.A. – The Latino Experience” and a local Emmy as reporter/producer for the five-part series “From Farm to Fork.” In 2015, Romero was honored by the National Hispanic Media Coalition with the Excellence in Broadcast Journalism Award.

Romero has travelled domestically and internationally in her role as a journalist covering stories in Prague, El Salvador, Mexico City, Guadalajara, and Rome where she covered the Papal Conclave for KTLA and other Tribune television stations across the country.

Prior to joining KTLA, Romero anchored and reported for 10 years at KUSA-TV in Denver. She also spent nearly a year reporting for KUSA-TV’s sister station in Austin, Texas, KVUE-TV. While in Denver, Romero’s assignments included the 1993 papal visit, the standoff in Waco and the bombing of the Federal Building in Oklahoma City.

Romero has been a member of the National Association of Hispanic Journalists and an advisory board member for the University of Colorado School of Journalism and Mass Communication. She has taught anchor and reporting classes for UCLA Extension. She spends much of her personal time in the community speaking at schools and community events.

Romero has a Bachelor of Science degree in journalism, broadcast news from the University of Colorado in Boulder, Colo. She was born and raised in Denver.

Romero’s mother, Viola, was diagnosed with severe dementia in 2012 and Romero moved her mother to California where Romero became her primary caregiver. Viola lived with Romero, her husband David and their daughter Olivia for nearly 10 years. Viola passed away January 24, 2022, and that’s when Romero began honoring her mother’s life and legacy by giving back to Alzheimer’s and Dementia awareness and research.

Romero lives in Los Angeles with her husband, daughter and their two rescue dogs Benny and LuLu.

Ambassador Melanne Verveer to be Honorary Chair of the 15th Annual International...