The 2019 International Women of Courage Celebration 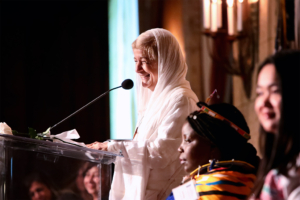 “Each one of you is a hero. Give it time to think how you can get this hero out to serve the world,” Magda Gobran Gorgy, the founder of a non-governmental organization in Egypt that serves the most impoverished urban slums and rural villages regardless of their color creed, or faith, and a 2019 International Woman of Courage Awardee, encouraged the capacity crowd at the 12th annual International Women of Courage Celebration at the Jonathan Club in downtown Los Angeles. The Celebration was hosted by American Women for International Understanding together with the U.S. Department of State and the International Visitors Council of Los Angeles. “Mama Maggie” abandoned her life as a college professor to found Stephen’s Children, which feeds, clothes, educates and mentors children, as well as provides vocational training for adults. Mama Maggie shared the story of a woman who started singing as a 90-year-old. “It’s never too late,” she reassured the audience.  “Don’t let your singing die in you.”

Each one of you is a hero. Give it time to think how you can get this hero out to serve the world 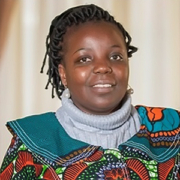 Fellow International Woman of Courage Awardee, Anna Aloys Henga, a human rights lawyer from Tanzania, affirmed Mama Maggie’s call to action: “This award has fueled me and my colleagues and my fellow awardees even more.” Ms. Henga has dedicated her entire professional career to advancing human rights in Tanzania, with a particular focus on women and children. She coordinated Tanzania’s Anti-Female Genital Mutilation Coalition, mobilized lawyers to defend the human rights of women in Maasai communities, and encouraged women candidates to run for office in the 2015 general election cycle. “We are very passionate about our work,” she explained, “but we did not know there are people watching and appreciating what we do.” Ms. Henga thanked the U.S. Department of State for the award, but, she reassured the crowd, “We are still fighting.  We’ll fight up to the end.  As Mama Maggie said, we’ll continue singing after our last breath.”

Since 2007, the Secretary of State’s International Women of Courage (IWOC) Award honors women who have exemplified exceptional courage and leadership in advocating for human rights, women’s equality and social progress around the globe.  Awardees traveled to the U.S. for an award ceremony at the State Department in Washington, DC on March 7, 2019 and had an opportunity for cultural exchange through the International Visitors Leadership Program. The honorees completed their stay in the United States at AWIU’s International Women of Courage Celebration on March 19th. The Celebration provides an evening for the IWOCs to connect with AWIU members from around the country and Los Angeles-based patrons who support women’s global issues. In addition, AWIU provides each honoree with a grant to continue her vital work in her home country. 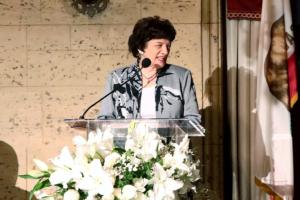 Nancy Annick, the 2019 IWOC Celebration Chair said, “We were honored once again to host the International Women of Courage Awardees in Los Angeles.  We were moved and affected by the stories of the honorees, but we were also proud to embrace them with the support of our Los Angeles sponsors and patrons.  Every guest left the evening feeling humbled, but also inspired to continue to care, and to start singing!”  The evening was emceed by AWIU member and IWOC Committee member, Cynthy Moffatt.  CBS This Morning Co-Host, Norah O’Donnell, was the Honorary Chair of the evening.

There are many women who will never have the opportunity to sit in this room, who need us not to forget them, to recognize that the only way we will make a difference is to continue to care 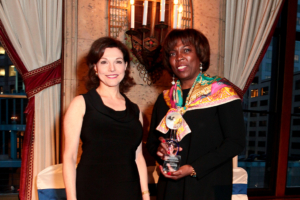 AWIU also presented the 2019 Internationalism Award to the Honorable Ertharin Cousin. An expert on food insecurity and hunger, Ms. Cousin has served as U.S. Ambassador to the UN Agencies for Food and Agriculture in Rome, as well as Executive Director for the World Food Programme. She was recognized for her commitment to the disparities of hunger and her advocacy for long-term solutions worldwide.  Ms. Cousin thanked, congratulated and reminded. First, she thanked AWIU for the award, and acknowledged AWIU’s work ensuring that voices are heard.

Second, she congratulated the International Women of Courage, who represent so much of what is possible in the world.  “I am inspired by you,” Ms. Cousin told the IWOCs. “I congratulate you, I am humbled by the work that you do and your representation of your countries here tonight.” Third, she reminded the audience, “There are many women who will never have the opportunity to sit in this room, who need us not to forget them, to recognize that the only way we will make a difference is to continue to care.” She went on, “It is not enough for us to just save lives, we need to help change lives. We need to ensure that people have the access to tools and to the support that is necessary for them to build their livelihoods.”

As a powerful group of women, we continue to Be Bold, Be Brave, Be Brilliant to Be Better in order to responsibly embrace the opportunities that address the issues affecting the equity and humanity of women around the world and around the block 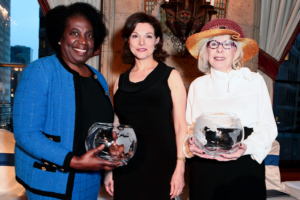 The Bernice Behrens Founders Award was presented by AWIU President Maria Schory to long-time AWIU members, Diane Mitchell Henry and Robin Winter Odem. Ms. Henry was honored for her work in the governance of AWIU and the enhancement of its mission, including her role in providing opportunities for young women in the D.C. area to attend an educational symposium on international careers. Ms. Henry said about AWIU, “As a powerful group of women, we continue to Be Bold, Be Brave, Be Brilliant to Be Better in order to responsibly embrace the opportunities that address the issues affecting the equity and humanity of women around the world and around the block.”  Ms. Odem was also honored for her role in the governance of AWIU and her dedication to women’s issues, as well as for her role at the chapter level in promoting woman to woman understanding. Reflecting on her experience in AWIU, Ms. Odem stated, “AWIU is a small, but powerful organization. There are many important attributes to being a member, but the most important to me is AWARENESS. AWIU provides an opportunity to be aware of the problems of others and to do something about it!”

The Presenting Sponsor of the 2019 International Women of Courage Celebration was Deloitte for its ninth consecutive year. A leader on the global stage, Deloitte is committed to fostering a culture of inclusion, embracing the idea that a diversity of perspectives helps us look deeper to find answers. Additional sponsors included: Hahn & Hahn LLP, O’Melveny, The Walt Disney Company, Wells Fargo, Ariel Investments, JAMA and the JAMA Network, Northwestern Mutual Los Angeles, Providence Foundations of Southern California, UCLA Anderson School of Management; and US News & World Report.